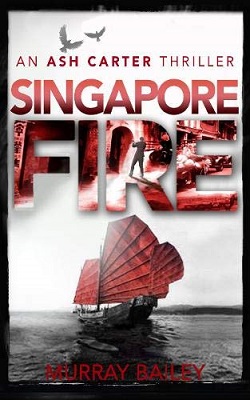 She wants to escape
He wants to save her
But nothing is what it seems.

Singapore 1954 and once again, private investigator, Ash Carter is caught between the government and the criminal gangs. It’s time for Carter to choose. Escape now or stand and fight?

Murray Bailey has published several novels including six in the Ash Carter series of which Singapore Fire is billed as the final book. It appears I’ve joined the party late as I have not read any of the previous five but that did not diminish my enjoyment or understanding in any way.

From the outset I was drawn into the setting of Singapore in 1954 which was barely nine years after the end of the Japanese occupation during World War 2. The island was at that time a British Crown Colony working towards self-governance which came later that decade. As with most major ports the island population is a steamy ethnic mixture including Malays, Chinese, Indians, British and people from other parts of Indo-China.

Bailey writes mainly in the first person from Carter’s perspective which gives us a wonderfully atmospheric feel for the area. Other chapters following his girlfriend, Su Ling, are written in the third person. During the course of the tale Bailey takes us to most parts of the island and the nearby districts of Malaya just across the causeway; from the smartest of hotels to the poorest slums. As a private detective and a former Captain in the British Army, the character of Carter is ideally suited to be our guide.

Alongside the main theme of getting Su Ling to safety, Carter works on various seemingly unconnected cases which highlight different aspects of life in the area. As the story develops the action builds in a thrilling bust, followed by a number of fascinating twists as the full story is revealed.

Singapore Fire is a thoroughly entertaining read that will keep you hooked. I have awarded a nearly perfect 4.5 stars.