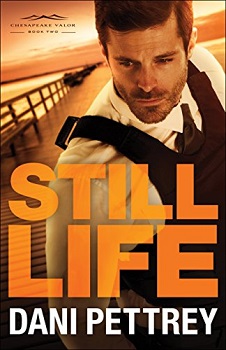 Blacklisted in the photography business when one of her shots causes a scandal, but desperate to somehow continue in the profession, Avery Tate answered an ad for a crime scene photographer. She fully expected to be laughed at, but crime scene analyst Parker Mitchell hired her outright–taking time to teach her the trade. Now she’s half in love with the man, half terrified to even acknowledge her feelings, and completely hooked on the job–until the next crime hits too close to home.

Avery attends the gallery opening of a new photography exhibit to support her best friend who modeled for the show. The only image of her, though, is a chilling photo of her posing dead. Only the photographer insists he didn’t take the shot, and Avery’s friend can’t be found. As Avery and Parker, along with Parker’s brilliant friends, begin to dig into the mystery, they find themselves face-to-face with a dangerous, relentless, and deadly threat which could endanger them all.

‘Still Life’ is the second book in the Chesapeake Valor series by best-selling American author, Dani Pettrey. We meet Avery when she attends a photo gallery at the behest of her friend, Skylar who was a model for one of the new exhibits. Avery is protective of her childhood friend and feels guilty for getting Skylar involved in the criminal underworld when they were young.

Avery discovered a Christian faith and changed her life around; she would do anything to help Skylar do the same. As a professional photographer, Avery immediately realises something is very wrong when she sees the framed photograph of her friend and more to the point, Skylar is nowhere to be seen.

To find Skylar, Avery joins forces with Parker, a crime scene analyst, who also happens to be the man she loves. Romance is always fraught with difficulties in novels, so inevitably they have emotional baggage which prevents them being together.

As I haven’t read the previous book in the series, suddenly meeting several other characters in a very short space of time, threw me. However, I found out they were friends of Parker and all worked in some form of law enforcement. Each played their part to advance the story and it appeared they were mostly committed Christians who had no qualms with asking the Almighty for help with any tricky aspects of their investigations.

A second plot angle was then introduced which I thought might connect with the main storyline but I suspect it is part of the ongoing theme running across the series. It did though serve the purpose of breaking up the action and adding to the suspense of the search for Skylar.

The book is written in the third person and we see the action from the perspective of various characters. The title is a clever play on words and fits very well. The chapters are short with hooks at the end, so the author achieved her objective of tempting me to read just a little bit further, until I found I really couldn’t put it down.

Each scene is beautifully set with descriptive passages which paint a vivid picture. I did wonder at one point if this was going to be a story where the characters never needed to sleep. However, I think to pre-empt any criticism, the author herself drew attention to the fact her players had been working for almost two days without a break. Whilst the subject matter is strong, there is no unnecessary violence or explicit scenes; indeed Avery and Parker are paragons of virtue.

This multi-faceted book has an exciting plot with a secondary thread weaving through it and is layered over a love story. I thoroughly enjoyed ‘Still Life’ and commend the author on a well-written story. I award a maximum five stars.

Praised by New York Times best-selling author Dee Henderson as “a name to look for in romantic suspense,” Dani Pettrey has sold more than 400,000 copies of her novels to readers eagerly awaiting the next release. Dani combines the page-turning adrenaline of a thriller with the chemistry and happy-ever-after of a romance. Her novels stand out for their “wicked pace, snappy dialogue, and likable characters” (Publishers Weekly), “gripping storyline[s],” (RT Book Reviews), and “sizzling undercurrent of romance” (USA Today).