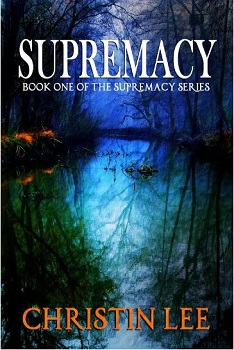 Kate Parker, is a 17 year old senior living in Texas. She’s on the swim team, has two incredible best friends, and a passion for saving animals.

She falls hard when she meets a mysterious and fascinating guy named Lucas. He has a sexy accent and a killer smile. However, she sees unexplained pain and anger in his dark brown eyes. He claims he’s a foreign exchange student from Spain who is attending the local University—Kate knows there’s more to his story than that. She works hard to discover who he is—what he is.

In the world we live in, the thought of a whole society living below us rarely crosses our minds. But Christin Lee’s book, Supremacy harnesses and builds up the idea of life below the surface, and makes it into an engaging heart clenching urban fantasy romance novel which will leave you dumbfound at the end of it.

The beginning of the book starts off rather normal and basic. The story then builds up into something unimaginable, with a natural paced relationship building up to the uncovering of secrets, which goes beyond human guessing of how it will all turn out.

The book is full of mental battles which need to be conquered and wars between the reader and the characters making decisions you will truly want to get involved in.

With its easy to interpret language and restriction of high level mature content, the book can be read by audiences above 14 and still be highly enjoyed by ages 21 and above.

After an assessment of Supremacy, I would believe it’s a book that I actually enjoyed reading, and will be looking forward to the second book in the series.

Christin Lee lives in beautiful Northern California. She attends college, is addicted to coffee, and loves friends with fur and four legs, and anything that’s Butterfinger! SUPREMACY, the first book in her YA series, is her debut novel.