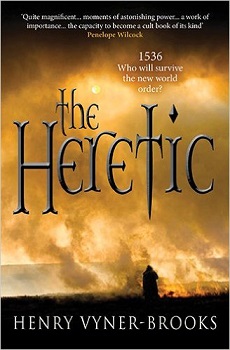 In 1536 it seems the entire known world is changing–strange new lands are discovered and the Reformation is challenging Rome and its power. In England the king’s declaration of a new church and dissolution of the monasteries overturns the customs and authorities of centuries. In the new world order, spies abound and no one can be trusted.

To Brother Pacificus of the Abbey of St. Benet’s in Norfolk, it looks like his abbey alone will be spared dissolution. But this last Benedictine house is mired in murder and intrigue. Then when Pacificus falls under suspicion, more than his own dark past comes to light, while the body count keeps rising. Pacificus’s fate becomes entwined with that of three local children after their parents are arrested for treason and heresy. Protected only by this errant monk, a mysterious leper, and a Dutch eel-catcher, the children must quickly adjust; seeking their own identity, they soon find that neither parents nor protectors are quite what they seem.

Based on historical events, this post-medieval mystery is laced with romance, fuelled by greed, and punctuated with bouts of feasting, smuggling, and jailbreak.

The Tudor years were a frightening time to live. When King Henry VIII passes ‘The Act of Supremacy’ to his people of England, and then declares himself the head of the Church of England, for all those who followed other faiths, their lives just became more dangerous.

Those that disagreed with the king’s religious views were executed in a brutal and cruel manner.

When the Fenton children are left orphaned, after their parents were convicted of treason, Brother Pacificus takes them in and tries to get them to the safety of his sister Sarah. However this is not as easy as it sounds and he needs help, but not all characters are whom they seem.

The Heretic is set over a four year period, between the years 1536 and 1539, an era in which it must have been horrendous to have lived.

The story is gripping and will have you turning pages like lightning. It is however a very brutal book as well, with exceptionally graphic scenes that if you are of a squeamish nature, you may want to pass over these parts.

The book isn’t for the faint-hearted at over 600 pages long, though it sometimes plays out like there are numerous stories within the main story, and lots of characters so you don’t really notice the length of the book.

It is mainly about religion and the faith of the people, with the Heretics being devotees to the Bible and the reformation movement.

The historical accuracy within this book just shows you how much planning and revision went into it.

The Heretic is a dark, epic novel that will teach you a thing or two about the Tudor years. It will also throw you off course more than once, and keep you in suspense over and over again. A fantastic novel that is certainly worth your time.

A landscape architect by training, Henry Vyner-Brooks lives in the Lake District, with his wife Ruth and five children.