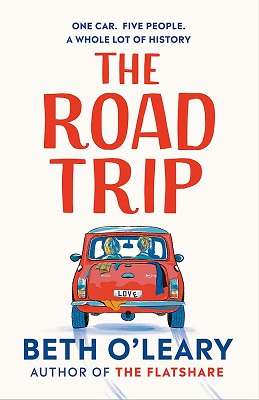 Addie and her sister are about to embark on an epic road trip to a friend’s wedding in rural Scotland. The playlist is all planned and the snacks are packed.

But, not long after setting off, a car slams into the back of theirs. The driver is none other than Addie’s ex, Dylan, who she’s avoided since their traumatic break-up two years earlier.

Dylan and his best mate are heading to the wedding too, and they’ve totalled their car, so Addie has no choice but to offer them a ride. The car is soon jam-packed full of luggage and secrets, and with four hundred miles ahead of them, Dylan and Addie can’t avoid confronting the very messy history of their relationship…

Will they make it to the wedding on time? And, more importantly, is this really the end of the road for Addie and Dylan?

In the early hours of the morning, Dylan and his friend Marcus have set off early to attend their friend’s wedding in Scotland. When Dylan becomes distracted by the sight of the woman in the mini in front of them, convinced it is his ex-girlfriend Addie who he hasn’t spoken to in two years after a bad break-up, he ends up driving into the back of the car.

Turns out he was right, it is Addie and her sister Deb and passenger Rodney, who were also on the way to the wedding. With the car Dylan was driving no longer driveable, the five of them decide to travel together in Addie’s car. What could possibly go wrong?

Having loved Beth O’Leary’s first novel, ‘The Flatshare‘ and naming it as one of the best reads of 2020, I couldn’t wait to jump right into this book.

The book is told from two POVs Addie’s and Dylan’s and also in ‘Then’ and ‘Now’. In the beginning, all we know is that Addie and Dylan used to date and that their break-up was pretty bad, bad enough to make them avoid each other. However, they have both been invited to a friend’s wedding in Scotland but didn’t expect to be spending so many hours in each other’s presence.

I loved that all five occupants had different personalities and how much tension the group had between them. From obnoxious Marcus who was extremely rich and had no filter, plus constantly hungry. Outgoing Deb who was a new mother and worried about leaving her son for the weekend and Rodney who Addie offered a lift to the wedding when he had no other way of getting there who is mysterious and doesn’t like talking about himself.

There are a lot of adventures and mishaps on the way as well as arguments. The plot was great fun and I enjoyed the wackiness of some of what happened and the revelations that came out. Plus the tension of will they even make it to the wedding on time with so many things occurring. I preferred the ‘Now’ moments to the ‘Then’ sections but I understand that the past was needed to explain how it all ended up so bad between Addie and Dylan.

The book was pure joy and I completely became hooked on the worst road trip ever, one I would have loved and hated to be a part of. It was comical and heart-warming at the same time.

Beth studied English at university before going into children’s publishing. She lives as close to the countryside as she can get while still being within reach of London, and wrote her first novel, The Flatshare, on her train journey to and from work.

You’ll usually find her curled up with a book, a cup of tea, and several woolly jumpers (whatever the weather).