Today we welcome author Spring Horton to Whispering Stories with her Promotional Post for her new book ‘The Veritas Guild: Book One‘, which was released on 1st August 2019. 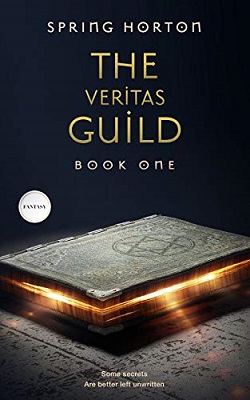 Nestled in the countryside, near the city of York, England, lies an estate shrouded in mystery. Its name is the Veritas Guild, and to the average human, it is simply a rather odd research institute. Its true nature is much more supernatural.

The Guild was founded long ago, by the Roman goddess Veritas, to keep track of, and hold sway over, the supernatural world. Deep within Veritas’ heart lies the Investigations wing, the last line of defense, the detectives who investigate their own.

The team is led by the Archangel Raziel, and employs the vampire Jack Dynos, and the lycan David Talbot. When a new recruit is sent to them by the all powerful, all mysterious Conclave, and a new case breaks at the same time, it’s not just any other day at the Guild. Supernatural beings are disappearing without a trace, and it’s up to Raziel and their team to figure out what’s really going on before it’s too late for all of them.

Along the way, they find ties to an artefact missing for thousands of years, run into the Norse god, Loki, and find out that what’s really going on might not be what they thought was happening at all.

Available to purchase or free with Kindle Unlimited

Spring Horton is an author and filmmaker, who focuses on LGBT characters, mystery, and fantasy. Her current book, The Veritas Guild, is the latest in a long line of mystery novellas.

These also include The Atticus McLaren Mysteries, about an autistic museum technician turned amateur detective, which is currently being produced as a film series. The next series is a comedy mystery set in modern day Sleepy Hollow.

When she isn’t writing books and movies, she likes to travel, especially to the UK, the outdoors, binge watching her favorite television, and cosplay.