The Writing Life of: Monika Schröder

This week on ‘The Writing Life of:‘ I am thrilled to be interviewing author Monika Schröder.

So without further ado, say hello to Monika.

Monika grew up in Germany and have worked as an elementary school teacher and librarian in American international schools in Egypt, Chile, Oman and India. After living in India for eight years my husband and I returned to the US in the summer of 2011. We now live in the Blue Ridge Mountains of North Carolina.

I like to travel to new places and to learn about different cultures. Of course, I read a lot of children’s books, but I also make time for adult literature, mostly historical fiction. If I’m not reading or writing, I love to bake, hike or watch movies. Since we moved to North Carolina, I also have become interested in gardening.

When we lived in India, my husband and I adopted an Indian street dog. We called him Frank.

I only became an author when I was already forty years old. As a child I always loved to read, but I didn’t like to write.

Then later, I was already a teacher, I took a class for which I had to write a story. That’s when I wrote a story about something that happened to my father when he was a child at the end of World War II in Germany. And the instructor of my class liked my story and encouraged me to continue writing. Out of that grew, over many years, my first book, THE DOG IN THE WOOD.

When I had a finished draft of what became my first novel, I worked hard on revising it. I took a writing workshop and over many, many revisions the mansucript became good enough to be published.

When I grow up I’d like to write as well as Philip Pullman. I love his work. I also admire Kate DiCamillo and Avi.

I try to spend about three to four hours a day writing. Usually, I start the day with at least one hour in the morning, sometimes dressed in my bathrobe. But I don’t always put words on paper, some days I only change a comma or stare out of the window.

My favorite part is revising. I enjoy making a draft better and better through the process of revision. Sometimes my dog, Frank, joins me when I write, but he mostly wants me to scratch his belly, so he is more of a distraction than a helper. 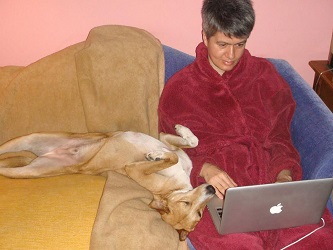 Where Monika Writes (with Frank)

No. I just try to stay focused and not be distracted by social media. And I need absolute silence.

I write on my laptop.

Once I have spent so much time with the character over the course of writing a book they all grow close to my heart. I think I am still very much connected with Fritz, the main character in my first novel, THE DOG IN THE WOOD, who experience horrible things at the end of WW2. And I also like Wren, in BE LIGHT LIKE A BIRD, who I like because she didn’t give up her principles, even when it was difficult, and grew into a confident young woman over the course of the book.

No, I usually have an idea of a story when I set out to write it, but the details develop in the process of writing it. Often there is a crisis at the half-way point, when I have to re-think where am I going to take this manuscript and how will I get there. I am trying now to become more of a planner, but I don’t think I can plan out an entire novel before I actually write it.

After the death of her father, twelve-year-old Wren finds her life thrown into upheaval. And when her mother decides to pack up the car and forces Wren to leave the only home she’s ever known, the family grows even more fractured.

As she and her mother struggle to build a new life, Wren must confront issues with the environment, peer pressure, bullying, and most of all, the difficulty of forgiving those who don’t deserve it.

A quirky, emotional middle grade novel set in Michigan s Upper Peninsula, Be Light Like a Bird features well-drawn, unconventional characters and explores what it means to be a family and the secrets and lies that can tear one apart.”

I actually wrote a draft of this story in 2010. Then, in 2012, I took it out of the drawer and revised it. After that another two years of revising passed until it was done and my agent found an editor who wanted to buy it.

Yes, I get stuck frequently. I usually go for long walks or I talk about my problem with my husband. It often helps to stop thinking or talking about it. Then, seemingly ‘out of the blue’, a solution arrives.

Since the story was about a girl who likes to watch birds, I wanted to give her a name that was also the name of a bird. And I liked the sound of “Wren.”

Wren character changes and grows over the course of the story. At first she is numbed by the death of her father. Then she tries to understand her mother’s strange and distant behaviour. When she arrives at her new hometown she wants to make friends but she doesn’t fit in with the popular girls.

By standing up for what she believes she discovers the strength inside of her that she didn’t know she had before. I also like her commitment to the bird sanctuary and how she and Theo are working toward saving it.

Well, I don’t think the book will be made into a movie. But I guess it is okay to dream. Yet, I don’t know any teen actresses. For the role of Mr. Leroy I envision Bill Nighy. And Randle should be played by Keanu Reeves. And, to keep up the fantasy cast: Meryl Streep should play Wren’s mother.

My husband is always my first reader. As a former English teacher he is an experienced reader and I always appreciate his advice.