The Writing Life of: Susan A. King

This week I am thrilled to be interviewing author Susan A. King. Susan will be sharing with us details of her writing life, telling us all about her new book ‘Banana Devil Cake‘, which was released on 18th January 2021, and answering a few fun questions too. This post contains affiliate links.

Susan A. King lives with her husband in a quiet suburb in leafy Hampshire.

The inspiration for the first book in her Beattie Bramshaw Mysteries series, Marrow Jam, came from her long experience and observation of competitors at the local Romsey Show where she regularly aspires to win Best in Show with her floral arrangements. Unsuccessful to date, she has been tempted to investigate more underhand methods by which to acquire the trophy, but has yet to sink to the depths described in her novel. Or so she would have you believe!

I do recall possessing a vivid imagination from a very young age. I’d love to make up stories or alternative worlds in my mind, although not necessarily writing them down. My claim to fame is winning the local library Halloween writing competition for my short story about things that went bump in the night at the age of 13.

I loved reading everything I could get my hands on so it’s hard to pin down one. If pushed, I would have to say Richmal Crompton and his Just William series. They would make me laugh out loud and I always looked forward to visiting the library to borrow the next instalment.

I think I always knew I would write a book one day, but it wasn’t until my children had grown up and left home that I felt I had the time needed to dedicate to the process.

I have to plot. Once I’ve decided on a storyline I draw up a chart of how each chapter will lead the reader through the story. Now on my third book, I’ve realised that not one of them has stuck to the original plan, but then again they’ve not wavered that far from it either.

If I can, I like to make an early start. I know if I delay, something (namely procrastination) will thwart my good intentions to knuckle down and finish the next chapter. 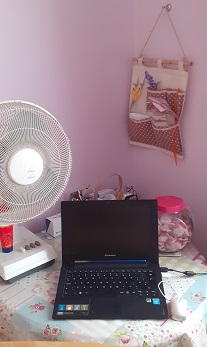 Where Susan A. King Writes

The freedom to collate all the mad ideas in my head and shape them into a story. 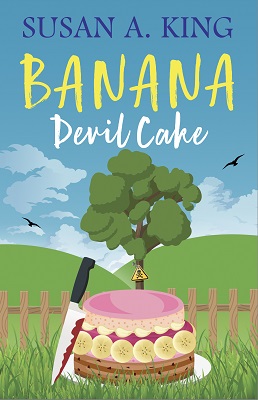 With the murder of last year’s fête judge now but a hazy memory, the village of Elmesbury has retired to its former tranquil existence. That is, until a mysterious newcomer sets in motion a series of events that will see members of the W.I. crossing wooden spoons at dawn.

In the midst of preparing for her long-awaited engagement party, redoubtable village busybody Beattie Bramshaw not only finds herself embroiled in a one-woman campaign to save the elm tree from which the village gets its name, but also having to contend with an outbreak of unrest within her beloved W.I. group. Rivalry to win favour with the judge of this year’s fête has fuelled dissent within the ranks and, when two members are found dead in mysterious circumstances, suspicions run rife.

Confident the devil is not only in the cake but in the detail, Beattie determines to uncover the clues that will ultimately lead to the killer’s conviction. But can she solve the mystery before another member of the W.I. is picked off?

Banana Devil Cake is a comedy crime caper in the style of Agatha Raisin and one that is guaranteed to lift your spirits. Prepare yourself for a tale of tea, cake and riotous goings-on from the author of Marrow Jam.

This book is the second in the series and so a lot of background research regarding the WI and village fêtes had already been done. However, one of the main characters is new to the village and I chose his profession to be that of a celebrity clairvoyant / fortune teller. It was a background I felt confident with as many moons ago I undertook an in-depth two year course studying the tarot.

I was still writing the first book in the series when the idea came to me, so I believe it was approximately two years.

I wasn’t entirely sure which genre my book fell into when I first delved into the world of novel writing. I just knew that I wanted my book to be humorous and include a mystery/murder. It was when members of my on-line writing group started referring to it as cosy crime that I realised that is where it sat best.

I wanted the series’ main character to have a name that is memorable whilst remaining historically correct in terms of the era she was born. I literally said names aloud and, having eventually plumped for Beattie, I repeated the process until I came up with a surname I felt fitted her character well. I used the same method for all the characters in the series, although I did cheat on occasion and plump for the surname of a friend.

I think the best way to gain an insight into the main character of Beattie, is to read an extract from book one in the series.

“Born in the 1930s and endowed with the fortitude to survive an epidemic which swept through the village, her twin, born of a lower constitution, had not fared so well. Beattie had learnt at a very young age her mother blamed her for being the one to survive and her brother, raised to the echelons of an angel, had made for an impossible adversary. Her father, although ambiguous, never doubted his wife’s words when told of their daughter’s wickedness and it was presumed by all who knew them the family were more unfortunate than most, a tangible distance between them and us soon being formed. But, despite the unhappy circumstance of her upbringing, and being blessed of an alert mind, Beattie had been quick to perfect the disposition required to survive in a world where there were few allies and even fewer sources of comfort.”

I would like to say ecstatic, but I don’t think any author feels their book is ever truly finished. If my publisher hadn’t told me to stop ‘fiddling’ (his words not mine), I think it would still be on my hard drive.

There are always two sides to a story.

I’m currently reading Three Hours by Rosamund Lupton. I also have a TBR pile as long as my arm, having failed to learn the lesson that although it takes but 5 seconds to purchase a book, it takes a lot longer to read it.

I’d be attending the monthly WI meeting and drinking in the secretary’s advice on how to create the perfect cake for the annual village fête Great Bake Challenge.

Murder on the Orient Express by Agatha Christie – It’s a dream of mine to one day take a trip on this famous train and enjoy a leisurely, but luxurious, meal.

Why do you drink so much tea?

I would like to say a big thank you to Susan A. King for sharing with us details of her writing life and for a wonderful interview.