When the Guilty Cry by M J Lee – Book Review

When the Guilty Cry by M J Lee – Book Review 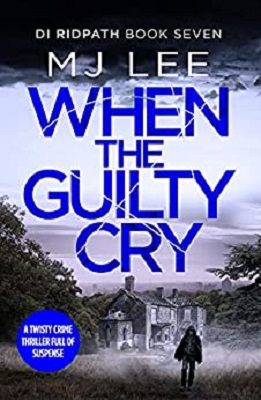 Three severed hands. No clues. A race against time.

Three embalmed hands are discovered in a disused Victorian house. Is it a gangland ritual? The work of a cult? Or just a prank played by Medical Students? And what happened to the bodies?

Meanwhile the Coroner needs to issue a Presumption of Death certificate on a teenage girl who vanished eleven years ago in mysterious circumstances.

As hints emerge the two cases are connected, DI Ridpath pushes himself to the limit to find out what really happened. It soon emerges the house is a former children’s home. When another woman, a local social worker, disappears, he is under immense pressure to find answers. What really happened at Daisy House Children’s Home all those years ago?

He has just one week to discover the truth…

Ghost Hunters are making a film at the site of an old children’s home that was closed and abandoned many years ago. The ‘hunters’ come across a hidden rucksack, inside are three severed hands.

DI Ridpath is called as part of his investigations for the Major Investigation Team (MIT) a job he shares alongside his Coroners Office work. The hands are from three different people, two males and a young female. Because they have been there for some time, he is given just a few days to work the case or it will be passed onto the Cold Case Unit.

Ridpath is already working on a case for the Coroners Office too, that of a sixteen-year-old girl who went missing in 2009. Her parents are after a Presumption of Death certificate as her mother has terminal cancer and wants closure before she dies.

It soon comes to light that the two cases could be connected, but with circumstantial evidence, his bosses on both sides want these cases closing, and Ridpath is running out of time fast.

Author M J Lee is back with the seventh instalment of his DI Ridpath series set in Manchester, UK. Ridpath is feeling overworked and underappreciated as he races to close the case of the severed hands and to make sure that there is no evidence that the young girl who went missing in 2009 is still alive so a Presumption of Death certificate can be given to her family.

Just like the previous six books I was gripped to this one reading it in just two sittings. I absolutely adore this series and look forward to every new book. Ridpath is an old-school detective who not only relies on the intelligence and data but his instincts too, something which gets up the noses of one of his bosses at MIT who hasn’t a good word to say about him and would love nothing more to be rid of him.

The pacing of the book didn’t feel quite a fast as the previous six, but I suspect that this is to do with the cases both being old, even if the hands had just been discovered. The secondary characters who work alongside Ridpath were back and as usual, we also get short chapters that do not feature Ridpath, normally from the killer he is hunting, this time they are from a missing person.

If you love realistic, captivating police procedural/detective thrillers then this is the series to pick up. When the Guilty Cry was an immersive read that was so amazing, addictive, and twisty. It had me rushing through the pages confident that Ridpath would work out both the cases, although one of them did come as a shock and wasn’t the outcome he was expecting. Now bring on book eight!!

What did you think of ‘When the Guilty Cry’? Share your thoughts in the comment section below!