The Weight of Shadows by Karl Holton – Book Review

The Weight of Shadows by Karl Holton – Book Review 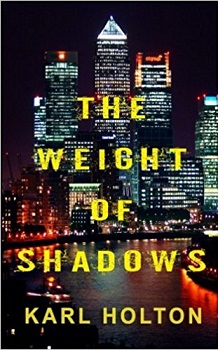 The Weight of Shadows
Shadow Series Book One

When you have spent your life in the shadows, what would you do at the dying of the light?

Three years ago the best murder detective in London is blamed for the death of his colleague and kicked out of the Met. A man with secrets buried in the past and present returns to London, the city that started the mysterious career which made him a billionaire. The two need each other. But they have no idea how much.

A gripping crime thriller mystery with twists from the beginning to end.

Karl Holton is clearly not a man to deal in half measures. While writing The Weight of Shadows he appears to have thrown in everything imaginable for a London based contemporary crime novel.

The cast of characters is enormous and at the start of the book we met a new set of apparently unrelated people in each chapter.  This was not much of a problem because the passages are headed up and I was confident that it would all come together in the end which it did with aplomb.

The story moved at a pace and at no time did I find it tedious. The author kept the action and the intrigue moving throughout.

I was worried by the gory descriptions of some of the crime scenes. I know from the media that such unwarranted violence occurs in real life but I think that some readers would be deterred, particularly by the scene in the prologue which was only loosely related to the rest of the story. No doubt Karl thought this would help draw in more readers but I believe it could put off just as many.

At the end the various characters and storylines come together very nicely and we are given a suggestion of a new team for future stories. The author also teases us with a question, encouraging us to re-read the book to discover the answer.

I have tempered my grading to four stars because of the gruesomeness but The Weight of Shadows is worth reading and I look forward to more from Karl Holton in the near future.

My name is Karl Holton and I started writing in February 2017.

I’m an indie author and self published my first book, ‘The Weight of Shadows’ in July 2017. This was the first in a series of books in the crime thriller genre, known as the ‘Shadow Series’. The second book in the series, ‘The Wait for Shadows’ came out in December 2017.

I worked in the financial markets for over thirty years. I decided to follow my dream of writing the stories that I’ve carried around inside my head for many years.

I live in Surrey, England with my wife and two children.