Whispers in the Dark by Chris McDonald – Book Review

Whispers in the Dark by Chris McDonald – Book Review 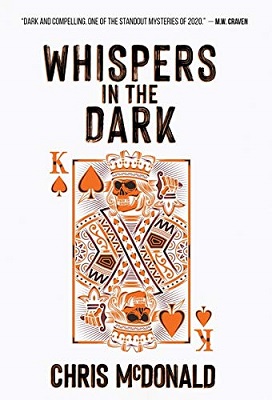 Who will heed the call when Death comes whispering?

Small time drug dealer, Marcus Stone and DCI Clive Burston had never met until one night in August. By the end of that night, both had been shot dead in a small bedroom in the heart of gang territory.

DI Erika Piper is called to the scene but is at a loss to explain what’s happened. How did these two even meet, let alone end up dead in what appears to be a strange murder-suicide? As Erika leads the investigation, another two bodies are found, killed in a similar fashion. One murder, one suicide. But who is controlling this macabre puppet show?

As Erika delves deeper into the lives of the dead, the pieces begin to fit together and a number of nefarious characters crawl out of the woodwork – one of whom is almost certainly pulling the strings.

A catastrophic event and a personal miracle threaten to derail the investigation. Erika must find the strength to continue, before the whispers catch up with her too…

DI Erika Piper is back in the second instalment of the police procedural thriller bearing her name. I haven’t read the first book but I can honestly say that this worked as a standalone, though if you are thinking of reading this one and then the first, beware there are a few spoilers.

The book is set in Manchester and opens with the discovery of two dead bodies in a house in a rough part of the city. One of the deceased is a small-time drug dealer, the other DCI Clive Burston. Erika is called in at the DCI killed was the partner of her boss and he wants her on the case.

The investigation is just getting started when there is another double murder this time within a church. The cases seem related even if the method of the kill is not the same. It would seem someone is pulling the strings of these victims and with each double pair, one is murdered the other committed suicide.

Can Erika and her team work out what is going on and why are pairs of people turning up dead in the same district?

Whispers in the Dark is a hard-hitting, thriller following a Detective Inspector who has certainly been through it with her cases and this one is no different. There are some harrowing scenes, especially the opening so if you are triggered by scenes of sexual assault on a minor this might not be the book for you.

Author Chris McDonald certainly has a knack for writing gritty plotlines and the book came across as a little too realistic for my liking, so don’t read it before bed! I did work out the culprit under half-way through the book, though this didn’t spoil my enjoyment of the chase. I could also understand, not agree, but understand why the culprit did what they did.

The book is dark and raw and I like a detective who isn’t afraid to throw herself into her work fully and get her hands dirty and put herself in danger. This is a real cracker of a read and if you love edgy, fast-paced police procedurals then this series is one to pick up.

Originally hailing from the north coast of Northern Ireland and now residing in South Manchester, Chris McDonald has always been a reader. At primary school, The Hardy Boys inspired his love of adventure before his reading world was opened up by Chuck Palahniuk and the gritty world of crime.

A Wash of Black is his first attempt at writing a book. He came up with the initial idea whilst feeding his baby in the middle of the night, which may not be the best thing to admit, considering the content. He is a fan of 5-a-side football, heavy metal and dogs.

Whispers in the Dark is the second instalment in the DI Erika Piper series, and Chris is currently working on his latest series, The Stonebridge Mysteries, to be published by Red Dog Press in 2021. 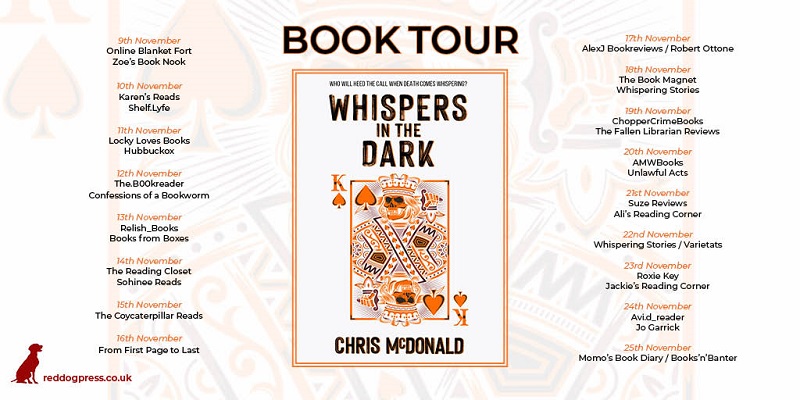 What did you think of Whispers in the Dark? Share your thoughts in the comment section below!