Today we welcome author Leslie Pike with the cover reveal for her upcoming new book ‘Wild in Paradise‘, which will be released on 30th October 2015. This post contains affiliate links. 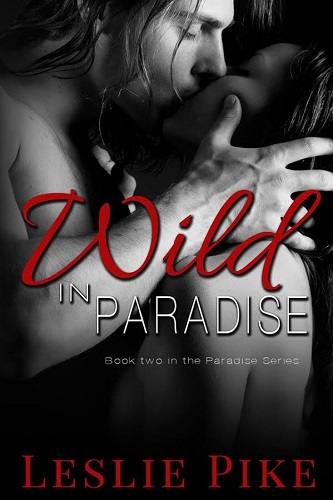 A movie set is a great place to test one’s endurance for temptations. They’re all there for the taking. A person can get away with their indulgences. For Finn Kennedy, Father Paul Cruz and Esme Scott, things are about to get very tempting.

Finn Kennedy is flying high, after his hit comeback film. He’s slayed his personal dragons, and with his Irish good looks and penchant for play, he’s catnip to women. For Finn, there’s no reason to settle on one, when there are so many to be sampled.

Father Paul Cruz is burned out from his years as the Catholic chaplain at San Quentin. He’s been a priest for all of his adult life, and he’s questioning that choice. Father Paul has never enjoyed the less cerebral pleasures of life. A sabbatical is what he needs. When best friend Finn is cast in a film about a Jesuit priest, he gets Father Paul hired on as a consultant. His world is about to be rocked.

Esme Scott’s a young woman running from an abusive husband. She’s on her own for the first time, and trying to make her way. When she gets a job as the Wardrobe assistant on the film, she discovers just what she’s been missing, personally, professionally and sexually. And she finds out just how much it takes, to correct past mistakes.

Beautiful Park City, Utah is the setting for Wild In Paradise, the second book in the Paradise Series.

Before writing her novel, Leslie worked as a screenwriter on episodic television. She has traveled the world with her Stuntman/Stunt Coordinator/Director husband, on movie sets from Africa to Israel, from New York to Los Angeles.

Some of her favorite things include calligraphy, long walks with her friends, and enjoying delicious food that other people have cooked!