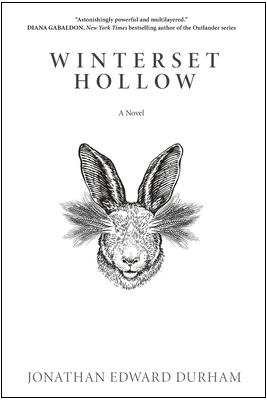 Winterset Hollow follows a group of friends to the place that inspired their favorite book—a timeless tale about a tribe of animals preparing for their yearly end-of-summer festival. But after a series of shocking discoveries, they find that much of what the world believes to be fiction is actually fact, and that the truth behind their beloved story is darker and more dangerous than they ever imagined. It’s Barley Day . . . and you’re invited to the hunt.

Winterset Hollow is as thrilling as it is terrifying and as smart as it is surprising. A uniquely original story filled with properly unexpected twists and turns, Winterset Hollow delivers complex, indelible characters and pulse- pounding action as it storms toward an unforgettable climax that will leave you reeling. How do you celebrate Barley Day? You run, friend. You run.

A novel as beguiling as it is engrossing, Winterset Hollow is an immersive, evocative tale of revenge, trauma, and what happens when predators become prey.

Winterset Hollow begins with three close friends on a small road trip to visit an island that inspired their favourite childhood book. While there, fiction soon blends with reality in ways that are terrifying and grotesque. The three young people are thrust into a situation where they must run for their lives. It’s best to enter into this novel knowing no more regarding the plot, as the strange turn of events is part of the fun.

In terms of characters, Eamon, Caroline, and Mark have instant chemistry. Their dialogue is realistic, and their personalities are distinct and relatable. Eamon and Caroline share a love of the book that brings them to the island, and Mark is just along for the ride. I cared for all three. The side characters were hard to distinguish, but they also only played a small part. On the other hand, the antagonists are utterly fantastic in their depravity, sorrow, and compulsion to enact revenge at any cost.

The action/horror scenes are well-described and the pacing is steady. The tension builds and ebbs in a way that keeps you reading well after you intended to set it down for the night. There is a mystery in the background that you are almost unaware of until near the end that helps explain certain aspects of Eamon’s character.

The prose is absorbing because it’s very elegiac and flowery at times, which contrasts in an exciting way with the visceral nature of the violence in the story. For example, passages like this are common: “It was a strange and weighty affectation as if they were eating their last meal before heading off to war and they were still hiding their conscriptions from their families.”

This is novel that sticks with you. It makes you wonder and contemplate even days after the final page. There are unanswered questions, but in a way that feels intentional. Both a slasher and dark fantasy, Winterset Hollow was unlike anything I’ve ever read.

Jonathan Edward Durham was born near Philadelphia in one of many rust-belt communities where he read voraciously throughout his youth. After attending the College of William & Mary, where he received a degree in neuroscience, Jonathan waded into the professional world before deciding he was better suited for more artistic pursuits.

He now lives in California where he writes to bring a unique voice to the space between the timeless wonder of his favorite childhood stories and the pop sensibilities of his adolescent literary indulgences.