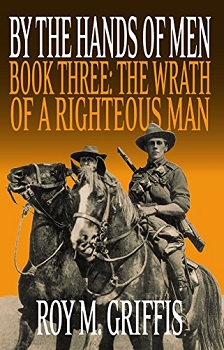 Continuing the epic story of the “By Hands of Men” series, a man and a woman, torn apart by fate, forge their own destinies in the world after the Great War.

Escaping her enslavement in Russia, Charlotte Braninov fights to build a new life in London while the shadow of modern fanaticism looms over Europe.

Robert Fitzgerald faithfully serves the Crown in Africa until honor compels him to risk everything to overcome an ancient evil, only to discover that the greatest war rages within himself.

This is the third book in the ‘Hands of Men’ series by American author Roy M Griffis. I had the pleasure of reviewing the first two books and he kindly asked me to assess his latest offering.

As with the second book, the structure of ‘The Wrath of a Righteous Man’ is divided into two parts, first we concentrate on Charlotte’s story before we reconnect with Robert who now finds himself in the heat and humidity of Africa.

Meeting Charlotte Braninov again was like becoming reacquainted with an old friend. We meet her on her journey from her homeland of Russia on board a ship bound for London. Travelling with her, are the compatriots she met during her imprisonment at the hands of the Red Army. During the sea crossing we witness a different side to human nature when benevolence takes the place of brutality. Charlotte’s altruism continues to shine through as she builds a life for herself and her companions in England.

Griffis gives us a bit of humour along the way with Charlotte’s charge, Zlata, learning some very colourful language from the sailors and choosing to use it at every opportunity. We also have some lovely examples of alliteration, similes and metaphors to add depth to the descriptive passages. I particularly liked Robert’s appearance, when he looked: ‘as if he had been shat out of a dyspeptic rhino.’

I penalised the author previously as I felt Charlotte’s story was so powerful that Robert’s tale paled by comparison. However, meeting Robert again, I found I had a new respect for his character and more sympathy and understanding of the personal demons he battled. This book is much more balanced and I found myself getting as anxious for Robert when he was again called to arms, as I was for Charlotte who faced dangers of her own.

Again Griffis has carried out his background research meticulously, as I’ve now come to expect. A huge amount of work has gone into this story and I congratulate him on his dogged determination to deliver yet another fine book. I believe the calibre of his writing improves with every story.

I look forward to much more from this very accomplished wordsmith and I can award ‘The Wrath of a Righteous Man’ no less than a perfect five stars. Roy M Griffis has now set the bar extremely high for his next story and I look forward to finding out what fate has in store for Charlotte and Robert.

Since then, I’ve never looked back. I’ve written poems, short stories (twice runner-up in the Playboy college fiction contest), plays (winning some regional awards back East and a collegiate Historical Play-writing Award), and screenplays. I’m a member of the WGAw, with one unproduced screenplay sold to Fox Television. Along the way, I’ve done the usual starving artist jobs. Been a janitor, a waiter, a clerk in a bookstore. I was the 61st Aviation Rescue Swimmer in the Coast Guard (all that Tarzan reading wasn’t wasted). I’m also not a bad cook, come to think of it. Currently, I’m a husband, father, and cat-owner. I’m an avid bicyclist and former EMT.