The Writing Life of: Claire Wong

This week on ‘The Writing Life of:‘ I am thrilled to be interviewing author Claire Wong. Claire will be sharing with us detail of her writing life, telling us all about her latest book ‘The Runaway’, which was released on 17th February 2017, and answering a few fun questions too.

So without further ado I’ll hand you over to Claire. Post contains affiliate links.

Claire Wong is originally from Wales and now lives in Yorkshire. She studied Classics at Oxford University. In 2005 she was awarded the Owen Sheers Poetry Prize, and the Laurie Magnus Poetry Prize in 2006.

Claire works in charity communications, where she has the privilege of sharing uplifting stories through press releases, newsletters and articles every day.

She loves languages (especially ancient ones that nobody speaks anymore), old maps and being outdoors.

From the age of eleven, if you asked me what my career plans were, I would have told you I planned to rule the world one day. Secretly, I wanted to be a writer, but I enjoyed saying outrageous things with a straight face to see people’s reactions.

This is seriously hard to answer. I read a lot as a child. Some of my favourites were Michael Morpurgo, Arthur Ransome and C.S.Lewis. Perhaps that’s because all three of them write about ordinary people doing extraordinary things.

Very early on, but I think it became a serious goal for me when I was about fourteen. I had got to a point of carrying a notebook with me everywhere by then, and writing came as naturally as thinking.

I read and wrote constantly, trying to pay attention to what I did and didn’t like about certain stories and styles. I entered lots of poetry competitions and later joined a writer’s group.

After graduating I spent two years working for the local library service, learning more about the different genres and authors that make up the book world.

If I can hit two thousand words, I’m happy. But I will write for as long as I have energy and ideas. I try to schedule breaks, mostly to get away from the desk and stretch before my shoulders seize up.

I remember having to come up with pseudonyms each year for the school Eisteddfod (that’s a traditional arts and literature competition, for non-Welsh readers). You’d think after finishing off a piece of creative writing, it wouldn’t be so hard to invent a nom de plume, but I always struggled. Now I’m glad that I’m allowed to write under my own name for a change!

I like to sit somewhere on my own, preferably near a window, with a hot drink close by.

I scribble fragments and ideas in a notebook, before turning them into a draft on a computer. I don’t own a typewriter, but I love the idea of writing on one in a dimly lit attic room.

The Runaway is my first novel. I’ve written enough poetry to fill several books, but only had a few poems published so far.

I love a good plan! I like to have at least an overview sketched out before I start. I don’t mind taking a detour away from what I’ve plotted out in favour of something better, but I like to have some idea of where the characters are headed.

I’m pretty new to reviews, so can’t claim to have any good strategy. What has worked for me so far, after receiving negative feedback, has been to focus on a writing project that’s purely for the enjoyment of writing it. When I’m working on this, I don’t need to impress anyone, which means I can focus on crafting a story I like. That helps remind me that I don’t do any of this for the reviews; I do it because I love storytelling. 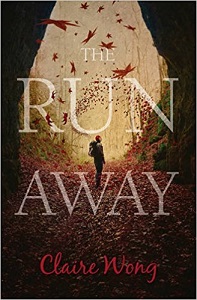 Shortly before her eighteenth birthday, Rhiannon Morgan runs away from the remote Welsh village of Llandymna. Camping out in Dyrys Woods, she starts to make a new life for herself and she finds space for her active imagination to run wild. Weaving together the stories she loves and memories of her past, including the mother she lost thirteen years ago.

Back in the village, Rhiannon’s disappearance triggers a series of events that uncovers the cracks in Llandymna’s quiet surface. Quick-tempered Callum finds himself reluctantly drawn into search parties, while a young police officer is forced to investigate his neighbours, and the village’s elderly story-teller hints at a secret that the older generation have kept for decades.

Over ten years ago, I wrote a short story about someone who walked out on their family and friends. Some time around 2014, I came across this story again and felt like there was more life in it than I’d written yet.

Over the next two years, I changed the setting and re-imagined some of the characters, and then rewrote the whole thing from start to finish, with a new ending. The Runaway was the result!

Having grown up in Wales, I knew I wanted names that suited the setting. Many of the surnames used are common Welsh family names, while the first names are all familiar from my childhood. I chose Rhiannon’s name because it is both modern and mythical, a popular Welsh name that features in the Mabinogion, a collection of medieval legends. It felt important that Rhiannon, as someone who loves stories and is so affected by them, should have a name that crosses both real and imaginary worlds.

Two of the characters have Ghanaian heritage, and so choosing their names was a bit different. While travelling in Italy some years ago, I had met a man from Ghana who told me how a lot of the names there refer to the day on which a person was born. I spent some time reading about all the different possibilities available before choosing Kofi and Ayawa.

Rhiannon is seventeen years old and has no time for hypocrites. Unfortunately, she’s recently noticed that her village is full of them, and even her closest family have turned out to be more flawed than she realised. She’s imaginative enough to dream of a better world, but doesn’t know how to make that a reality.

We meet her at the moment when she decides to run away from home. It’s an act of protest, but not one she’s thought through. So what’s driving her from this moment onward is a stubborn determination to survive on her own strength and skills, mixed with an over-active imagination that keeps asking the ‘what if’ questions and finding the potential for beauty in every situation.

The final chapter, in which the characters say goodbye to one another, was the hardest to write. I hate goodbyes in real life, so I didn’t much want to go through it here either.

For a long time, I actually dodged it by ending the story before this moment, but I knew it was important to have this scene, to let the readers and the characters recognise how far they’d come since the start of the book. It was an emotional process, and drew on some of my own experiences of parting from people who’d changed my life, but I’m glad I did it.

I like titles that seem perfectly clear to someone new to the book, and have extra meaning for the readers who finish it. ‘The Runaway’ tells you what to expect from the protagonist, but by the end of the book you’ll know that the title might not just be referring to the main character.

Lots of people read and gave feedback on particular chapters or sections, but my sister was the only person to read the entire manuscript before it went to the publishers.

Before submitting to any publishers, I wanted to find out more about how the industry works. I contacted the lovely Jess Tinker at Lion Hudson, who agreed to answer my questions about an editor’s perspective. We talked about what the process is for submitting and what author mistakes most annoy editors! Towards the end of the conversation she asked me about the novel that I’d written – I gave a bit of a garbled description of it because I am really terrible at pitching things, no matter how much I believe in them. But she invited me to submit the manuscript (I gave a very composed affirmative answer then got off the phone and danced around my living room) and about two months later Lion Hudson offered me a contract to publish it!

I allowed myself about a minute’s catharsis before I started editing it!

I am working on my next novel, A Map of the Sky. It’s the story of a boy who loves hero stories and a woman living with chronic illness. It’s set on the rugged coast by the North Sea and is about adventure, hope, disappointment and misunderstanding.

This is a sad one for me. It’s tiramisu, but it turns out I’m allergic to some of the key ingredients, so I will be holding auditions for the role of Claire’s new favourite food.

King and Lionheart by Of Monsters and Men – I love that this is a song about loyalty and bravery, plus it was my soundtrack to fording rivers and climbing mountains in Iceland, so I like the associations there.

A house with its own library and enough guest rooms to gather together all my friends and family in one place.

“Hi, I’m the obligatory Talking Animal Sidekick for your next adventure. Grab a pair of shoes you can run in, we’ve got a long way to travel before we can save the world.”

You can find out more about Claire by visiting the website/social media sites below.

I would like to say a big thank you to Claire for sharing with us details of her writing life, and for a wonderful interview.