The Writing Life of: Donna Hepburn

This week on ‘The Writing Life of:‘ I am thrilled to be interviewing author Donna Hepburn. Donna will be sharing with us detail of her writing life, telling us all about her latest book ‘Flip-Flops, Fiesta & Flamenco‘, which was released on 20th March 2018, and answering a few fun questions too.

I live in the North East of England with my partner and two beautiful boxer dogs; Floyd and Freya.

From a very young age my head has always been full of stories and I’ve been wanting to write a book since way back when, well forever really but finances (running my own business,) procrastinating, and self-doubt have conspired to hold me back.

Dithering about what to write was another stumbling block, my reading taste is so eclectic; Vampires, Serial killers, Dystopia, Vikings, Witches, History, Travel, Autobiographies, the only genres I don’t really read are Spy Fiction, Westerns or Chick Lit Comedy.

Anyway, I digress. After my Eureka moment I decided to scrap all my almost finished, half-finished, ten chapters, first page attempts, concentrating on actually finishing my first novel.

Flip-Flops, Fiestas, and Flamenco is the first in a series of three novels, I am currently writing the second. I’m on a roll!

When I’m not writing I enjoy reading, travel and cooking I’m passionate about animals and consider myself a bit of a Gin connoisseur.

Blimey, that’s a long time ago, I always wanted to write books or alternatively work with dogs or horses, unfortunately I ended up in sales and marketing instead.

Enid Blyton, of course I enjoyed the Magic Faraway Tree, the Mallory Towers series and the Famous Five, I also loved the Silver Brumby Series by Elyne Mitchell and my all-time favourite children’s book was Moon on the Water by Nina Warner Hooke, I recently went online to buy a copy and nearly died when I saw it was over £100.

I’ve always wanted to be a writer, but never believed in myself enough to make it a reality.

I didn’t initially, that’s all it was a dream; like wanting to marry your favourite actor or winning the lottery, then I had the idea for Flip-Flops and it didn’t seem quite as crazy anymore.

No, I’m easily distracted so I should really, I usually give myself a deadline mess about for the first half then write like crazy as it gets nearer the time. I still work full-time so fit writing in whenever I can.

I would if I wrote in a different genre for example a horror or paranormal romance as it’s a completely different fan base.

Because the 3 books in the series begin and end in similar ways I always have the last chapter in the bag before I’ve done the middle.

Usually on the computer but I always take a notebook with me on journeys, so I can utilise my time and scribble down any amusing situations or funny one liners that I think can be adapted to the book.

Flip-Flops is my first completed novel, but I have a portfolio of unfinished work, which I may go back to at some point.

Definitely a pantser, I have the beginning and the end sorted, then everything in between is anyone’s guess.

I’ve been really lucky with the reviews for this book, everyone is entitled to their own opinion, so I am not expecting them all to be fabulous.  I’m sure I’ll deal with it. 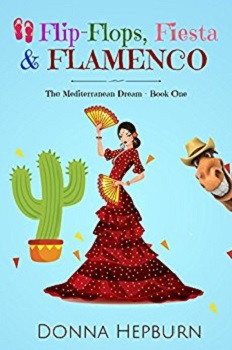 Flip Flops, Fiestas, and Flamenco is the first in a series of three books about two best friends, their lives, loves, and adventures after moving to a small village in the Andalusian hills.

Abby and Lou have been BFF’s since the first day at Uni. Despite being opposites in both looks and personality they were drawn to each other, sharing a flat, dreams and a love of animals.

Through the ensuing years despite heartache and divorce, they remain as close as ever.

Abby would be the first to admit her life needs an injection of fun. Middle-aged, divorced and slightly overweight, she’s a mother/general dogsbody to two layabout sons, a pink-haired Amazonian on-off girlfriend and an incorrigible British Bulldog named Chester. Her lifelong dream of living in Spain’s glorious sunshine has been long forgotten or has it?

Lou was stuck in her own rut, never fully recovered from a tragedy in her past. A long list of online dating disasters had left her wondering if she will ever find love again. Her cool ice-maiden persona is shattered along with her cat’s eardrums when she wins £400,000 on an online bingo site. Could this be the answer to both their prayers?

Flip-Flops packed, they embark on their adventure, but it isn’t all sun and sangria. Warring pets, new neighbours, cooking experiments, scary wildlife and an escapee Donkey named Santos combine to make it an unforgettable Summer.

Can their friendship survive or will the Mediterranean dream become a nightmare?

I wrote the book pretty quickly, but the editing took a while and finding a publisher took even longer. I went down the self-publishing route initially but that didn’t work for me personally, so all in all around 2 years.

The two main characters Abby and Lou just sprang to mind when I had the initial idea and I couldn’t imagine them being called anything else as I started writing, the other characters just fell into place too, the animals were definitely the most fun to name though, for example the chickens are all named after leading ladies in films.

Ah, Abby is a middle-aged lady who like most of us at a certain age has released she hasn’t made the most of life. Creative, a bit ditsy and extremely clumsy, she is a big softie especially where animals are concerned and is fiercely loyal to her friends. She talks a lot, drinks a lot, likes to cook and loves a party but she is also vulnerable and slightly naïve. I think a lot of people relate to her and find her amusing.

Lou is very different, independent, sarcastic, very together and has different interests I guess she’s like the straight man in a comedy duo.

Another character that readers seem to love is Santos the donkey and he’s becoming a bit of a star in his own right.

I can’t really say without giving away a spoiler but those you have read the book will know immediately which scene I’m talking about (had to get the hankies out).

It was part of the initial idea, I knew the title straight away and I also knew the next two books in the series were going to be similar so I then had to go through types of shoes which could be used in relevant alliteration, the second book is called High Heels, Hope & Hacienda and the final one will be Sandals, Siestas and Sunsets. (See what I did there).

My good friend is an editor and proof reader, so she got to read it as I wrote it.

I sent a lot of emails. Then Junction Publishing agreed to sign me, they changed the cover which I think it needed as the first self-published version was pretty awful to be honest. My background is in marketing, so the last month has included a lot of self-promotion and hopefully it’s working.

I sat stunned that I had actually done it, writing a book gives you an incredible sense of achievement, then, if I remember rightly I had a large gin and tonic.

I’m currently working on the sequel to Flip-Flops, then I have an idea about another comedy series-watch this space….

Anything by Quentin Tarantino, The Sound of Music, Breakfast at Tiffanys, or Marley and Me.  I know weird right!

At the moment it would be; God bless this Acid House by Kasabian although I listen to anything from Linkin Park to Rachmaninoff.

A villa in Spain.

‘I hear you’re writing a second book-Ditch the Donkey, get a Duck!’

You can find out more about Donna Hepburn by visiting the website/social media sites below.

I would like to say a big thank you to Donna for sharing with us details of her writing life, and for a wonderful interview.