What Holly’s Husband Did by Debbie Viggiano – Book Review

What Holly’s Husband Did by Debbie Viggiano – Book Review 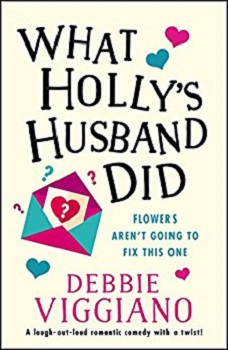 What Holly’s Husband Did

Holly Hart has been married for fifteen blissful years to hubby Alex. Well… if you don’t count last Christmas, when she accidentally found a load of flirty texts on Alex’s phone. But every marriage has its ups and downs and Alex had a perfectly reasonable explanation… so why can’t Holly forget what she saw?

With the help of best friends Jeanie and Caro, as well as their handsome neighbour Jack, Holly resolves to settle her mind once and for all with a bit of sneaky detective work. So what if her husband isn’t exactly Brad Pitt? He’s hers, and if someone else is trying to steal him she wants to know who… But the truth is way more shocking than Holly ever anticipated. Can Holly, let alone her marriage, ever recover from what she discovers?

Holly has been married to dentist Alex for Fifteen years. They have one teenage daughter Sophie and were happily married until Holly found some flirty text messages on his phone from ‘Queenie’. Alex tries to convince Holly that it is someone from his practice who is stalking him, but she’s not convinced.

With the help of lifelong best friends, Jeanie and Caro, plus neighbour Jack, Holly decides to seek out the truth for herself. But has she bitten off more than she can chew?

I’ll start by being completely honest. I got three chapters into this book and wrote it off. I just couldn’t get myself interested in it, and so I put it down for a while, but something kept on nagging at me to pick it up again. So eventually I gave in and gave it a second go. Whilst I didn’t find myself laughing hysterically, or even out-loud, I did find the book engaging and interesting and I’m glad that I didn’t write it off completely.

The characters are all well developed and interesting to get to know and were perfectly realistic. The relationship between the three best friends is just how you would imagine it to be when you have been through everything together since school. Holly is a woman on a mission. A lot of women would have screamed and yelled at the messages on their husbands’ phone, but Holly decides that he is her husband and this other woman isn’t having him. Not sure I would have done the same, especially with an over-bearing, stuck-up husband like hers was.

There is a great twist in the book too which I didn’t see coming. I sat and read the book (second time) on a hot glorious day in the garden and finished it within a few hours. It held my attention and was truly enjoyable. The author has taken a serious issue and made it light-hearted, which has really worked. The book is an easy read perfect for adding to your summer TBR list.

Prior to turning her attention to writing, Debbie Viggiano was, for more years than she cares to remember, a legal secretary. She lives with her Italian husband, a rescued puppy from Crete, and a very disgruntled cat. Occasionally her children return home from uni bringing her much joy…apart from their gifts of dirty laundry. 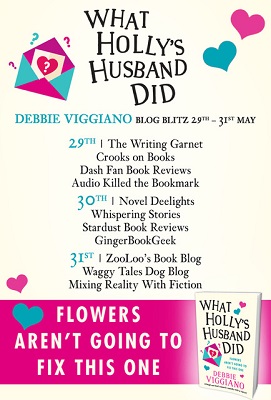