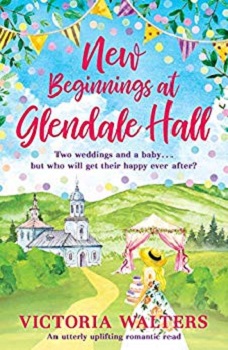 Two weddings and a baby…but who will get their happy ever after?

Emily Prescott’s life isn’t going to plan. Her dreams of starting a family with fireman boyfriend Greg and opening up her own bakery in London feel like they will never come true. So when a wedding invite arrives from her oldest friend, Beth Williams, Emily is thrilled. Not only will she get to return to her childhood home in Scotland, but best of all – Beth wants her to bake the wedding cake!

However, her excitement is cut short when she discovers that Greg has cheated on her. Devastated by his betrayal, Emily flees to Glendale Hall, Beth’s grand estate in the Highlands, and tries to distracts herself with helping with the wedding plans, but that’s not easy when Greg keeps hounding her to forgive him. Then she’s introduced to Glendale’s new young and handsome vicar Brodie, and things become even more complicated.

When Emily discovers that Greg’s betrayal runs deeper than she imagined, she finds herself with a whole host of decisions to make, especially when she discovers her long awaited dream is finally being fulfilled – at exactly at the wrong time…

I read the first book in the series, Coming Home to Glendale Hall, last year and thoroughly enjoyed it, so when I found out the sequel, New Beginnings At Glendale Hall, was ready I just had to have it. I was not disappointed and it was certainly worth the wait.

Whilst the main focus of the book is on Emily Prescott and her annoying boyfriend/ex-boyfriend Greg. Beth, Drew, Izzy, and house-keeper Sally from the first book all played their roles too in this one.

Emily is best-friends with Beth. She is the friend that Beth turned to all those years ago when she found out she was pregnant and had no-where and no-one to help her. The pair have kept in touch even though Beth now lives in Scotland and Emily in London.

With the wedding of Beth and Drew nearing, Emily’s boyfriend casually lets it slip that he can’t attend the wedding as he has to work, although others at his place of work have been given subsequent time off. He then goes out one evening stating that a friend needs him but returns in the early hours and with a message from a woman on his phone about their night together. Trouble is the woman is a colleague of Emily’s too.

Hurt and wanting to put some distance between them she heads to Scotland early, telling everyone she wanted to make the wedding cake she promised to Beth there rather than trying to transport it. Greg doesn’t seem to be able to get the message though that Emily needs some time to work out how she feels as he hounds her with phone calls and telling her it was a one-off and a mistake – But was it?

New Beginnings At Glendale Hall was everything I hoped it would be. I adored the first book but this one was so amazing, even with the annoying rat Greg playing a part. Emily is such a beautiful character who deserved to be treated with respect, not like a doormat. Her journey of self-discovery is certainly worth reading about, especially being set in the scenic Scottish highlands and at the amazing Glendale Hall.

The book reminded me of the film, Four Weddings and a Funeral (without a funeral I might add). It is just such an interesting, engaging, and unputdownable read. There were plenty of poignant moments alongside some humour too and there was also the amazing quirky character of Vicar Brodie who you just can’t help loving.

Whilst it is the second in a series and I do believe that you should read the first book before reading this one, it is not essential as it does work as a standalone too. It is a relaxing read with plenty going on to keep you entertained the whole way through. I do hope that we will be back at Glendale Hall once again as I miss it already.

Victoria Walters writes up-lifting and inspiring stories. She’s the author of four novels, THE SECOND LOVE OF MY LIFE, SUMMER AT THE KINDNESS CAFÉ, COMING HOME TO GLENDALE HALL, and NEW BEGINNINGS AT GLENDALE HALL. She has been chosen for WHSmith Fresh Talent and shortlisted for an RNA award. Victoria was also picked as an Amazon Rising Star, and her books have won wide reader acclaim.

As well as being an author, Victoria also works as a Waterstones bookseller. She lives in Surrey with her cat Harry (named after Harry Potter), and loves books, clothes, music, going out for tea and cake, and posting photos on Instagram.

What did you think of New Beginnings At Glendale Hall? Share your thoughts in the comment section below!