The Writing Life of: Jane O’Reilly

This week on ‘The Writing Life of:‘ I am thrilled to be interviewing author Jane O’Reilly. Jane will be sharing with us detail of her writing life, telling us all about her latest book ‘Blue Shift‘, which was released on 5th October 2017, and answering a few fun questions too.

Jane O’Reilly would like to say that she’s the secret love child of Wonder Woman and grew up on a tropical island in the Pacific, but in reality she grew up in the north of England where it was quite cold and if anyone had any super powers, they kept them well hidden.

After university and a brief and very misguided spell as a teacher, she decided it would be better for everyone if she stayed at home and looked after her children. But what she really wanted to write was a book about a space pirate in which she could blow things up . .

Her latest novel, Blue Shift, is available from Amazon and in bookstores.

I had all sorts of career aspirations. I wanted to be an astronaut, or Indiana Jones, or maybe Nancy Drew.

Definitely Judy Blume. Her books were hugely important to me as a child. I also adored Roald Dahl (I can still remember The Witches being released and reading it in one go) and Enid Blyton.

I had a half baked idea as a teenager that it was what I wanted to do, but life got in the way and I never got any further than thinking it might be a good idea. I started writing my first book when my youngest child was 11 months old. I’d been at home with young children for several years by then and was starting to feel like my brain was rotting. I needed a creative outlet, something I could do at home that wouldn’t cost a lot of money.

Nora Roberts had written her first novel when she was in the same position, so I decided to have a go to see if I could do it too.

With my first novel, I set myself a target of 100,000 words and I just worked on the document on my laptop until I reached that length. I didn’t know anything about publishing or writing. My husband encouraged me to send it to a couple of agents, which I did, but it unsurprisingly got form rejections.

I began to realise how much I didn’t know about writing and set about finding it out. The internet led me to other novice writers. I discovered the Romantic Novelists’ Association and Romance Writers of America. I entered competitions and won a few.  I read books about writing, and most importantly, I wrote and wrote. My first published novel was my fifth manuscript.

Do you aim for a certain amount of pages, or words before you stop writing? I write in-between school runs. When I’m working on a first draft, I aim for 3,000 words a day. When I’m editing I work in the time available but don’t set myself a number of pages because each page will not need an equal amount of work.

I did think about it, particularly when I switched genres from romance to science fiction, but my editor encouraged me to use my own name, so I did.

I don’t think so! I sit down, I work, and I try to stay off the internet.

I do everything on my laptop. I can type faster than I can write by hand, and as everything has to be in that format eventually anyway, it makes the most sense to me.

Do you have any unpublished work? I’ve written 19 books in total. 13 of those have been published so far and no. 14 is due to be published in May this year.

Definitely a plotter.  I can hold a shorter book in my head, but in a bigger book like Blue Shift which has multiple sub plots and multiple points of view, it has to be plotted out beforehand. That’s not to say that I don’t change the plot as I write, because sometimes you don’t know if a particular plot turn works until you try it out.

I make a conscious effort not to read reviews. Once a reader has bought a book it belongs to them, and they are entitled to their opinion. I also find that reviews can distract me and make it harder to write, and that includes both good and bad ones. 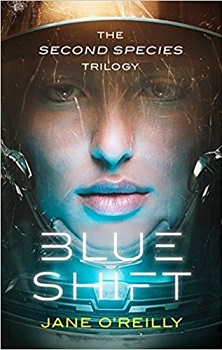 The rich hide away while the rest will do anything to survive. Humanity have only one hope: crossing hostile alien territory to reach a habitable planet. It’s lucky that for some, fighting their way through space is just a way of life . . .

Jinnifer Blue is on the run. An expert pilot, she apprehends criminals on behalf of the government and keeps her illegal genetic modifications a closely guarded secret. But when a particularly dangerous job goes south, Jinn is left stranded on a prison ship with one of the most ruthless criminals in the galaxy.

Now she must decide if she can trust her co-prisoner – because once they discover what the prison ship is hiding, she definitely can’t trust anyone else . . .

This book took a long time. I first started writing it back in 2013, and it was published in May 2017. During that time I wrote multiple drafts, submitted to agents and wrote more drafts.

The name of the two main characters, Jinnifer Blue and Caspian Dax, came straight into my head. The other characters were more difficult. I look through the books on my bookshelves for ideas. I also look at the names in film credits, they can be an great source of inspiration.

What makes them tick? Jinnifer Blue is a rich girl who has fallen from grace. She’s working as a pilot which is an acceptable job for her woman from her social class, but she has genetic modifications and nanotech which is not.  She’s something of a loner and has major trust issues.

Dax is a pirate who finds himself tangled up with Jinn when they are thrown in prison and have to work together to escape.  He’s a man who is used to being in charge and he isn’t too happy to find himself a. In prison and b. Stuck there with an upper class woman.

Definitely the last scene of the book. The opening scene is always difficult, but writing the end and knowing not just that you have to get it right, but that you are leaving the characters behind, is really tough.

My husband actually came up with it.  A Blue Shift is a decrease in wavelength of an electromagnetic wave, but also relates to the character change of the heroine through the book.

Definitely not! At this point the only people who read my manuscripts prior to publication are my agent and my editor.  I have the most fantastic editor (Anna Boatman at Piatkus) and she is able to pick a book apart and pinpoint exactly what works and what doesn’t.  It’s important not to muddy the waters with feedback that might not send you in the right direction.

I wrote multiple drafts of the book. Once I had it at a stage where it was starting to come together and I had done what I could with it, I went on a writing retreat with Julie Cohen and she read through the first three chapters and the synopsis and gave me some guidance on where it was and wasn’t working. I did some more work on it and then started submitting to agents.

This is the point where you really need to hold your nerve. I knew the book had potential, but I also knew it was going to be a difficult sell. I had three requests for full manuscripts and a lot of encouraging rejections from agents who loved it but felt it was too niche for them to take it on. I signed with Ella Diamond Kahn of DKW literary in early 2015. We worked on the book together for a year before it went out on submission, and it sold to Piatkus in summer 16 for a summer 17 publication.

I think I had a 5 minute window of ‘yes, it’s done’ and then I had to go and pick my kids up from school.

The second book in the trilogy, Deep Blue, is due to be published in May this year, so I’ve got cover art, copy edits and proofs still to come. I’m currently working on the third and final book, Blue Planet.

I have an outrageously sweet tooth and my favourite thing is the giant fruit and nut slab from Hotel Chocolat.

Definitely Cyndi Lauper Girl’s Just Want to have Fun. I’m a child of the 80’s, and that song sums it all up for me. Plus I love the clothes in the video.

A bigger house. My dream would be something in the middle of a forest with turrets and arched windows. I might have overindulged in Disney films as a child.

‘Turn off the internet and do some work’

You can find out more about Jane O’Reilly by visiting the website/social media sites below.

I would like to say a big thank you to Jane for sharing with us details of her writing life, and for a wonderful interview.