The Writing Life of: Val Portelli

This week on ‘The Writing Life of:‘ I am thrilled to be interviewing author Val Portelli. Val will be sharing with us detail of her writing life, telling us all about her latest book ‘Weird and Peculiar Tales‘, which was released on 4th July 2018 and answering a few fun questions too.

Val’s pen name ‘Voinks’ started as a joke then gradually spread through the family, so it was an obvious choice when her first book was published. Although unique it was not memorable, and she is gradually switching to publishing new books under her own name.

Despite receiving her first rejection letter aged nine from some lovely people at a well-known Woman’s magazine, she continued writing intermittently until a freak accident left her housebound and going stir crazy. The rainbow saving her sanity was completing and having her first full length novel published. This was followed by a second traditionally published book before experimenting with self-publishing.

In between writing her longest novel to date at over 100,000 words, she publishes weekly stories for her Facebook author page and web site. She writes in various genres, although her short stories normally include her trademark twist of ‘Quirky.’

A planet with forty-eight-hour days would be useful to have time to write all the stories waiting to be told, and to become better acquainted with the bloggers who are so supportive of authors struggling to release their characters onto the world at large.

Reviews are always welcome as they help pay for food for the Unicorns she breeds in her spare time.

I wasn’t very adventurous; it tended towards librarian or teacher but I ended up with a career in banking and finance which wasn’t as boring as it sounds. I set up and ran the first small business centre when the banks began to diversify. Oh, the glamour. 😀 It involved meeting the Mayor, making my own coffee, and coming up with Plan B when, an hour before our grand opening reception, I discovered my assistant had stored all the booze in the now time locked safe. As it was bank holiday the keyholders were long-gone, and scattered all over the country.

When I was very young I read all the usual childhood authors, but I think the first one I followed as a fan was Dennis Wheatley, probably from when I was about ten or eleven.

I’ve always loved writing and submitted a short story to a woman’s magazine aged about nine, so perhaps it was in my blood.

I wrote short stories for friends and family, often humorous accounts of holidays and so on, but had never thought of being published as life was too busy. Around seven years ago I had a freak accident which left me first in hospital for a month, then housebound, staring at the ceiling. Finishing and submitting my first book ‘Changes’ stopped me from going stir-crazy, and gave me the time to finally become a published author.

I have two actual deadlines for the week – to write a story for my blog every Sunday and my author page every Friday, usually around 1,000 words each. Apart from that I don’t have a particular word or page count. During the week I write whenever I’m not editing, proof reading or learning some new aspect of publishing, but I set myself goals to have this book finished by Christmas, that one published by the autumn and so on.

My first books were published under the pseudonym ‘Voinks.’ Although original, I’ve discovered it’s not very memorable so am gradually reverting to my usual name.

I was born at three in the morning and that’s when my creative mind works best, although some people might find it strange I write when everyone else is sleeping. My bedtime is often around 5 or 6 a.m.so any conversation before midday might need translating. ‘Ugh,’ means ‘Good Morning. How are you? Where’s my coffee?’

Laptop using a standard keyboard attachment. I tried to write an old-fashioned letter recently and was shocked how long it took and how much my hand ached.

Three of my own, of which one has recently been re-published, one jointly with an author friend, and one as an inclusion in an anthology of various writers. I have two other books completed but not yet published, a shorter one which might be out by the end of the year, and another of over 100,000 words. The longer one has been through the first edit/proof-reading stage but I’m procrastinating over pulling it all together. The aim is to get it out within the next six months or so, and I’m also thinking of doing a follow-up to my first book.

Definitely a pantser, particularly with short stories. I get an idea then the characters take over and I never know where it will end up.

I check the reviews occasionally but need to concentrate more on marketing to increase my visibility. Amongst the excellent reviews, my first book received a 2 star with the comment ‘It just ended.’ After going through tears, anger and all the other emotions I ignored it. A few years later, when I was thinking of republishing, I read it again and realised the reviewer had a point!

I feel sorry for the authors who receive ‘1* -The dog ate it before I could read it’ reviews, but you just have to learn from the sensible comments and laugh at the ridiculous ones. 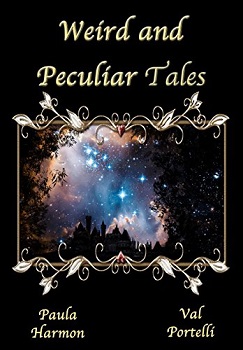 Housework fairies, strange events, dragons, unicorns and alternative fairy tales; there’s something for everyone in this unique collection of short stories.

Ranging in length from succinct teasers to longer narratives, the characters mix and match to provide a roller-coaster of emotions. The variety of styles and themes will keep you intrigued until the final ‘And they all lived happily ever after.’

With the joint compilation ‘Weird and Peculiar Tales,’ some of the stories were already written, but we first discussed it after Christmas last year, and published the eBook at the end of May and the paperback on the 4th July.

They usually decide for themselves what they want to be called, but my co-author noticed I had used the same name in different stories so I googled for a new one. In one of my other books I researched for a name popular around one hundred and fifty years ago and was amazed to find ‘Lee,’ in the top 20 for that time. I had always assumed it was a very modern name.

The characters in ‘ABC Destiny’ are all from very different backgrounds. It was very rewarding to blend their upbringing with their personalities and try to show why they turned out as they did.

My as yet unpublished book is loosely based on a real character. I’ve realised the harsh, brash exterior is a cover-up for an insecure, soft centre which makes their actions easier to understand.

Perhaps ‘The Wedding Guest’ from ‘Weird and Peculiar tales.’ A recurring difficulty was to strike the right balance between the real world and the fantasy one, so both seemed authentic.

The title and cover started off as ‘Twig Boy,’ (after one of the stories) and ended up with version eight million and ninety-two. I trawled Amazon to try and come up with something relevant that hadn’t already been used thousands of times, and I believe ‘Weird and Peculiar Tales’ is unique.

My co-author and I commented on each other’s stories as well as inveigling other ‘professional’ friends, authors and an English language teacher, to give us honest feedback. It’s great to have family saying ‘your book is wonderful,’ but we wanted genuine feedback to make it the best we could before publication.

The collaboration was self-published so it involved a great deal of learning, experimenting, discussion, editing, more editing, re-arranging, swearing and a few thousand emails.

We live in different parts of the country so we arranged to meet up for a celebratory meal, which involved an overnighter for Paula. Alcohol was involved.

Develop a proper marketing system, finish and publish my next two books, republish my first one then write some more.

Anything with Elvis in it.

It would depend on my mood. I love Rock and Roll, 60s, ballads, blues, pretty much anything except heavy metal.

Not a purchase as such; I would employ someone to do the ironing and spider busting so I could concentrate on writing in a clean house.

You can find out more about Val Portelli by visiting the website/social media sites below.

I would like to say a big thank you to Val Portelli for sharing with us details of her writing life, and for a wonderful interview.