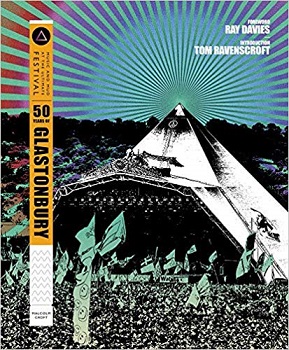 50 Years of Glastonbury celebrates the mud and mayhem that makes the festival one of the most popular musical events in the world, for fans and for artists, alike.

Packed with incredible photographs and stories of the acts and attendees who have made Glastonbury a phenomenon, this is a visual feast showing line-ups from each festival and outstanding photographs of headliners and cult acts from the festival’s extraordinary history.

Over the years I have been to music festivals and concerts but the one that has always alluded me is Glastonbury. I watch it on TV every year but it is never the same experience as being at a festival in person.

In 2020 Glastonbury celebrates its 50th birthday. Seems amazing that this music festival has been going for so long. There have of course been plenty of changes over the years, including how big the festival has become and how famous it is too. You only have to look at the aerial shot at the front of the book to see how massive Glastonbury is these days.

Beginning back in September 1970 by cow farmer Michael Eavis and his wife Jean, the festival was then called ‘Pilton Festival’ or ‘The Worthy Farm Pop Festival’ as it became more commonly known. The Kinks were the first big band that was to play at the festival but they pulled out at last minute. The festival was attended by just 1,500 people – an estimated 5,000 were expected.

After the first festival two prominent members, Andrew Kerr and Arabella Churchill joined the team and made the event what it is today. In 1971, ‘Glastonbury Fayre’ was born. The event was free to enter and this time 8,500 people attended. This time though it was more than just about the music it was about the environment issues too.

Micheal Eavis wasn’t happy about the destruction the festival had caused to his farm and the issues to the local area and residents. Because of this, it took 7 years before another festival was considered and even that in 1978 was more of a spontaneous free festival.

Moving into the 80s the festival grew from 18,000 attendees in 1981 to 60,000 in 1987. The famous pyramid stage was now a permanent feature and bands were wanting to play the event including 80s groups New Order, Joy Division, Aswad, Smiths, Elvis Costello, and Van Morrison to name but a few. However, there was more unrest (just like the whole of the UK) in the 80s and there were plenty of clashes that caused issues for the festival.

The 90s were really the turning point for the size of the festival and how popular it became, though it didn’t start out well. In 1990 there were huge clashes between new age travellers and the security guards, so bad that the 1991 festival was cancelled and more tougher fencing and security were put in place for future events.

1994 was a bad year for them too, but it wasn’t the festival goers that were this issue this time. The pyramid stage burned down a week before the festival opened and a makeshift, temporary structure had to be built rapidly. This was also the year that the festival was first aired on TV taking it to people who couldn’t attend and giving it international status.

The book takes us through each decade, right up to the present. There is a wealth of knowledge within the pages and it is fascinating to read about how the festival began and the ups and downs that have taken place.

The book is also filled with amazing photographs, beginning with black and white shots of the first festival. Just looking at the images shows you what this festival means to people. There are some powerful shots in the book that do make you stop and think about the way the world has changed and evolved.

If you are a music lover then this book is for you. It is absolutely jam-packed with information all written in a way that hooks you in and makes you keep on reading. It has certainly given me the craving for actually attending the festival one day.

This year’s festival will be held between 26th-30th June with artists including Kylie Minogue, Miley Cyrus, Stormzy, The Cure, The Killers, Sheryl Crow and many many more are due to play.