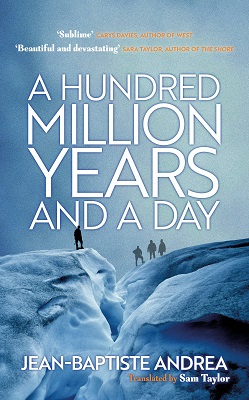 A Hundred Million Years and a Day

When he hears a story about a huge dinosaur fossil locked deep inside an Alpine glacier, university professor Stan finds a childhood dream reignited. Whatever it takes, he is determined to find the buried treasure.

But Stan is no mountaineer and must rely on the help of old friend Umberto, who brings his eccentric young assistant, Peter, and cautious mountain guide Gio. Time is short: they must complete their expedition before winter sets in. As bonds are forged and tested on the mountainside, and the lines between determination and folly are blurred, the hazardous quest for the Earth’s lost creatures becomes a journey into Stan’s own past.

This breathless, heartbreaking epic-in-miniature speaks to the adventurer within us all.

A Hundred Million Years and a Day by Jean-Baptiste Andrea is a very philosophical book and as I am not a philosophical person I struggle a little to understand what the author was trying to teach us and it took longer to read this book than it should have.

The main plot is set in the 1950s with Stan our protagonist and palaeontologist looking for a ‘dragon’. He was told the story about a man who as a teenager got lost up in the alps and took refuge in a cave where there was a ‘dragon’ skeleton, a huge one that was longer than the eye could see with a tiny head. Stan decided he needed to find out for himself if this ‘dragon’ truly existed. He enlists the help of his old colleague from work Umberto to assist him, though he isn’t best pleased when Umberto turns up with his young assistant Peter. Plus, they need a guide too.

The team set off up into the mountains but their task isn’t an easy one, with harsh weather, mountaineering by the inexperienced crew, and only the mind of another who believes he saw a skeleton to follow. Along the way, Stan reflects on his past life and what brought him to this moment.

There is no doubting that A Hundred Million Years and a Day is a touching and beautiful read. It has been translated superbly and as such the story flowed naturally. The plot was certainly different from anything I had read before and the characters too. I can’t say I’ve read a book where the main character is a palaeontologist.

The book is quite short at just 176 pages but author Jean-Baptiste Andrea has packed a lot in. You get a very atmospheric feeling from this book. You can feel the harshness of the mountains, the effort it takes the crew to just move a few metres, their mental health taking a battering from the lack of oxygen and the cold terrain, and appreciate just what these men are trying to prove.

I’m not always a lover of flashbacks but this worked well here. It was enjoyable to read about Stan in his younger years, about his turbulent relationship with his father and his mother who supported him when he was little, but then was no longer present in his life.

This is a powerful book that will have those readers who look at life philosophically adoring. It is entertaining and intriguing too. I wanted to know would the men survive, would they find the ‘dragon’, or was it just in the imagination of a teenager lost in a bitter, harsh land?

Jean-Baptiste Andrea is a director, screenwriter and author. Born in 1971, he grew up in Cannes. His first novel, Ma Reine, was published in 2017 and won 12 literary prizes including the Prix du Premier Roman and the Prix Femina des Lycéens.

What did you think of ‘A Hundred Million Years and a Day’? Share your thoughts in the comment section below!