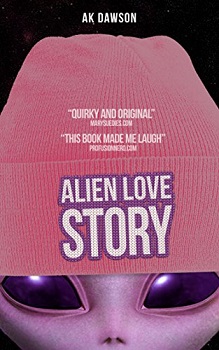 Life is a headache for 15-year-old Dan. This isn’t some kind of metaphor. Dan suffers from migraines that make just about everything he does unbearable. Added to that he’s lost almost everyone he cares about. So he feels lonelier than the last puppy in a pet shop.

But one day he sees a mysterious girl digging in the rubbish bins behind his house. Just by being near her, he finds that all his pain goes away. So he wants to see her again, of course. And get to know her. But she’s a bit strange. And her big eyes make her look, well, like an alien.

Does she really exist? Or is she just a figment of an overactive, under-loved imagination?

Close encounters of the romantic kind.

From Northern England to outer space, and from Dan’s bedroom to the sandwich shop over the road, ALIEN LOVE STORY is about a close encounter of the romantic variety. But there’s more to it than that.

Fifteen-year-old Dan has lived with his Nana in Newcastle for the last three months, ever since his parents and younger brother were killed in a car crash.

Since that day, Dan has been suffering from chronic migraines that often feel like some is shoving an over-sized pencil up his nose, or a screwdriver, and sometimes like a Woodpecker is having a go at trying to peck his head in! He doesn’t normally get any relief from his migraines, just some days are better than others.

One afternoon whilst out in the back alley of his Nana’s house, trying to get some fresh air, he notices someone rooting in the bins. Yelling at the person makes them stop, but he wasn’t expecting what he saw when the person turned around, nor how he would feel. He was staring into the huge eyes of a beanie-wearing girl, and his migraine had completely gone.

Who was the girl? How did she stop his migraine and why has he suddenly started dreaming about her naked!?

Alien Love Story is a humorous YA book dealing with some hard-hitting personal issues, such as grief, in a non-preaching, fun manner.

Dan is a lovely young man, and for someone who has had to deal with the kind of trauma no fifteen-year-old should have to deal with, it’s no wonder that something had to give. Unfortunately for him, migraines were the way for his body to cope. He is full of one liners, and witty come backs, and I liked him a lot.

The book maybe a quick read at only 125 pages long, but it sure packs a lot in. Fans of YA novels will love this book. It has a steady pace throughout, and a beautiful mastered plot. I found myself absorbed into the strange world that Dan suddenly found himself in. Don’t expect this book to take itself too seriously though, as there are a lot of things that would defy the laws of the universe, but they do make for fun reading! 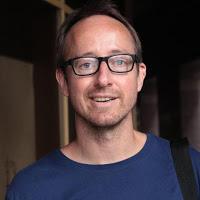 AK Dawson, aka Andrew, was born in South Africa, spent twelve years in the UK and now lives in Warsaw, Poland. In 2015 his feature film won ‘Best Screenplay’ at the Sydney Indie Film Festival.

When he’s not working on scripts, he writes prose and was given a Northern Promise Award at the 2010 Northern Writers’ Awards.