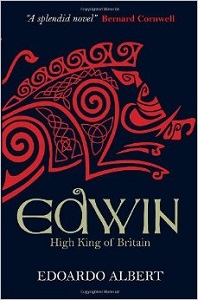 Edwin, the deposed king of Northumbria, seeks refuge at the court of King Raedwald of East Anglia. But Raedwald is urged to kill his guest by Aethelfrith, Edwin’s usurper.

As Edwin walks by the shore, alone and at bay, he is confronted by a mysterious figure – the missionary Paulinus – who prophesies that he will become High King of Britain. It is a turning point. Through battles and astute political alliances Edwin rises to great power, in the process marrying the Kentish princess Aethelburh. As part of the marriage contract the princess is allowed to retain her Christian faith.

But, in these times, to be a king is not a recipe for a long life . . . This turbulent and tormented period in British history sees the conversion of the Anglo-Saxon settlers who have forced their way on to British shores over previous centuries, arriving first to pillage, then to farm and trade – and to come to terms with the world view of the Celtic tribes they have driven out.

If, like me, you’ve ever wished you could travel back in time and observe society in another era, then this is certainly a book for you. Especially if you have ever wondered what life was like in Anglo-Saxon Britain.

"Edwin: High King of Britain" by Edoardo Albert is an extraordinary tour de force. Albert is a scholar whose imagination is deeply embedded in the turbulent life and times of the period.

While most of the hard facts in this tale come from the writings of The Venerable Bede (c. 673 – 735), the wonderful descriptions of people and places are enhanced by the almost poetic imagination and understanding of the author. He gradually leads us, not just into the deep forests and dark mountains of ancient Britian, but into the haunted minds and imaginations of its people. This is a world where for many the old gods hold sway, and pagan priests still predict the future from the blood and entrails of beasts. A world where the kings of Britain spent most of their waking hours fighting to keep their enemies at bay, and their power intact.

I say Albert leads us ‘gradually’, because for me the beginning of this story was slow to get under way. There were too many historical asides that interrupted the forward momentum of the plot, and not enough characterisation. The detailed description of a battle at the beginning did very little to entice, largely because not having any real sense of the characters involved, you didn’t care very much who won. And there are moments – certainly in the first half – when you wonder if it’s all grinding to a halt. But just when you think the tale is going no-where, Albert introduces a fine moment of tension, like the attempted high-jacking of his young bride, and suddenly you’re hooked once again.

As the story progresses, and gathers pace, Albert draws you more deeply in to the lives and personalities involved. Perhaps the most fascinating character to emerge – and that because his personality was developed at the most depth – was Coifi, the chief pagan priest to Edwin. The physical descriptions of this scuttling, drooling soothsayer, with his cloak of crows feathers, and rattle of bones, are so vivid, so oppressive, you feel he is in the room with you, a menacing, unclean presence. But once the Jesuit priest entered the King’s household, and finally converted Edwin, Coifi’s hold over the king and his entourage was threatened.

Albert cleverly portrays the gradual disintegration of the priests’ status and his personal disillusionment in gods who no longer responded to his call, so that you gain a real insight, and sympathy, for the man himself. The basic facts about Edwin’s conversion and Coifi’s response are recorded by Bede, but it is the sensitive imagination of Albert that has managed to bring this complicated character to life.

Interesting too, is how these very early Christians viewed the “new God”. One, they hoped, who would be more successful than the old gods in giving victory in battle. The transition to a full understanding of the Christian message was to take some time, as they viewed with astonishment, and some amusement, the idea that “you should love your enemies”!

One of the reasons I really respect this author is that he has kept to historical facts, and the truth is, there aren’t that many facts known to us about this period of British history. That’s why the story-line is a little bit thin. It takes us through Edwin’s last years as he plotted and fought to consolidate the fragmented kingdoms of Britain under his rule. We learn about the marriage to his feisty young second wife, Aethelburh, daughter of the King of Kent, and of the tensions this causes among Edwin’s two sons, and we get glimpses into some fascinating personalities including Penda, the cunning young warmaster of the King of Mercia.

Although the story is studded with battles – which will certainly fascinate many readers – and the aftermath of battles – what lifts this novel out of the ordinary is the author’s extraordinary ability to get into the Anglo-Saxon mind – and so effortlessly – so that in the end you find yourself thinking like them. His descriptions of places, his ability to conjure atmosphere, are second to none.

You find yourself hearing the riotous sound of the banqueting hall, the cries on the battlefield. You feel the uncomfortable sense of the gods watching you, of foreboding, of something hidden, unknown, in the dark landscapes at night.

So if, like me, you are a little unsure as you read the first few pages, persevere. This is a fascinating book, and I’m looking forward to reviewing it’s sequel "Oswald: Return of the King".

Edoardo Albert is, on paper at least, a surprisingly exotic creature: Italian, Sinhala and Tamil by background, he grew up in London among the polyglot children of immigrants (it was only when he went to university that he actually got to know any English people).

He avers that he once reduced a reader to helpless, hysterical laughter. Unfortunately, the piece that did so was a lonely-hearts ad.

He’s just finished “Oswald: Return of the King”, the second volume of The Northumbrian Thrones trilogy after “Edwin: High King of Britain”.

His biography of King Alfred, “In Search of Alfred the Great: the King, the Grave, the Legend”, was published in 2014 by Amberley Books.

At the moment he is writing a history of religion in London and volume three of his Northumbrian trilogy. He is quite busy.