The Writing life of: Edoardo Albert

This week on ‘The Writing Life of:‘ I am thrilled to be interviewing author Edoardo Albert. He will be sharing with us detail of his writing life, telling us all about his latest book ‘Oswald: Return of the King‘, which was released on 15th May 2015, and answering a few fun questions too.

So without further ado I’ll hand you over to Edoardo Albert. Post Contains Affiliate Links.

Edoardo Albert is, on paper at least, a surprisingly exotic creature: Italian, Sinhala and Tamil by background, he grew up in London among the polyglot children of immigrants (it was only when he went to university that he actually got to know any English people).

He avers that he once reduced a reader to helpless, hysterical laughter. Unfortunately, the piece that did so was a lonely-hearts ad.

He’s just finished ‘Oswald: Return of the King’, the second volume of The Northumbrian Thrones trilogy after ‘Edwin: High King of Britain’.

His biography of King Alfred, ‘In Search of Alfred the Great: the King, the Grave, the Legend’, was published in 2014 by Amberley Books.

At the moment he is writing a history of religion in London and volume three of his Northumbrian trilogy. He is quite busy.

You mean, after palaeontologist, zoologist, astronaut, president and world ruler? That would be round about eight then.

But as for the actual writing stuff, I didn’t get round to trying to right an honest-to-goodness novel until I was in my later teens – the dusty manuscript still lies somewhere in my parent’s attic, a booby trap waiting for any literary biographer.

So that was when I first tackled seriously the great wall of a writer’s life: the words. Those nuggety bundles of meaning and sound that shape and make, unite and divide. They’re bullets, and as deadly as any high-calibre rifle round.

By learning (slowly!) to cope with disappointment and rejection while also also learning (nearly as slowly!) how to write by, well, writing. A lot. Joining that first manuscript there are four other unpublished novels, in forms ranging from handwritten through typewritten to electronic, plus innumerable short stories. Some are actually all right; none are likely to ever see publication.

3) Is there a particular author who inspires you?

When I’m in full on, the-manuscript-is-due-with-the-publisher-in-three-weeks-help! writing panic mode, I head to a local library that has a quiet mezzanine level, arriving just after it opens and leaving only when I’ve written my target number of words for the day.

Otherwise, when I’m having to fit writing in around actual paid work, then I get up at 5am and try to do an hour or two before catching the tube.

I rather wish I did have some strange writing habits – I shall have to cultivate some! 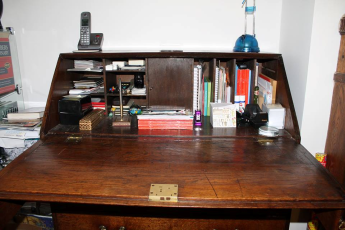 5) Do you write longhand, or use a typewriter or computer?

I’ve used all three, but now I mainly write on a computer, although I sometimes still write short stories longhand. I rather miss the clatter and ring of typewriters though.

In the first two novels of The Northumbrian Thrones, I am particularly fond of Coifi, a pagan priest turned almoner, and Acca, a typically needy bard (as with all writers, all he really wants to hear is how wonderful his work is, without in his heart of hearts believing any of the praise).

These books are as much imaginative history as historical novels.

The events in my books happened: in writing novels, I have tried to imagine why they happened as they did, given the people and circumstances of the time. So, in one sense, history has already plotted my novel for me. I know what did happen; my challenge as a writer is to show how and why it happened as it did. 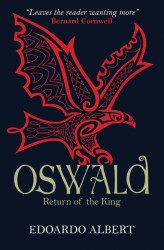 Oswald had found peace. But now he must fight for the Throne.

Oswald, as a youth, watched his father’s brutal execution at the hands of an ally of his uncle, Edwin. With his uncle taking the throne as High King of Britain, Oswald and his family fled.

Finding refuge on the holy island of Iona, Oswald is drawn to the alien faith of the monks of Colm Cille, and the peace he finds among them.

That is, until news reaches him that Edwin is dead, killed in battle, by Cadwallon and Penda, kings of Gwynedd and Mercia. The kingdom lies undefended while Cadwallon and Penda ravage the land. Oswald has a rightful claim to the throne, but he is sick of bloodshed; in his heart he longs to lay down his sword and join the monks of Iona.

But the Abbot does not need another monk; the Abbot wants a warrior King to spread the new faith. He must reignite Oswald’s hunger for glory and renown, for gold and power and the homage of men. But if he does, will it destroy Oswald?

Have a read of our reviews of Edoardo Albert’s books Edwin: High King of Britain and Oswald: Return of the King

I pitched the idea of a trilogy of historical novels about the Kings of Northumbria to my publisher, Lion Fiction, in the summer of 2012.

They asked me to write the first three chapters of the first volume, ‘Edwin: High King of Britain’, a synopsis for the rest of Edwin and an outline of volumes two and three.

I wrote that fairly quickly and what was interesting to me, as a writer, was how hard nosed a business decision it was as to whether to publish the stories: the key considerations were all about marketing – was there a market for these sorts of stories, could they access that market, all these sorts of things. The fact that the books were well written was taken as a given; otherwise, I’d never have got to the marketing questions stage.

Lion Fiction agreed to publish The Northumbrian Thrones trilogy in winter 2012 and I finished writing ‘Edwin: High King of Britain’, in September 2013. Then came editing, design, reviews, etc, and the book itself was published in March 2014.

I rattled through ‘Oswald: Return of the King’, writing it in three months from the beginning of July to the end of September 2014, and it has just come out now. I’m hoping to have finished the final volume of the trilogy, ‘Oswiu: King of Kings’, by November, with publication scheduled for late spring 2016.

Writer’s block, for me, is a by product of sitting around, waiting for inspiration.

All right, the muse does occasionally strike, but more often she’s away with more determined suitors. I found, as I took writing more professionally, that routine, determination and – most important of all in today’s world – finding somewhere that I couldn’t connect to the internet all served to unblock any blockages.

With the first volume in the series, ‘Edwin: High King of Britain’, no problem: Russell Crowe would be my ideal Edwin. As for Oswald, in my fantasy film, I’d cast Jonathan Rhys Meyers as Oswald and Chris Hemsworth as his brother Oswiu, with a view to him taking the lead in the final film of the trilogy.

My wife, Harriet, is my first reader and fiercest critic. Without her input my books would be much the poorer. The editorial team at Lion Fiction has also been excellent, spotting many a plot weakness and character flaw, to the great strengthening of the story.

I would like to say a big thank you to Edoardo Albert for sharing with us details of his writing life, and for a wonderful interview.