The Writing Life of: Michael-Israel Jarvis

This week on ‘The Writing Life of:‘ I am thrilled to be interviewing author Michael-Israel Jarvis. Michael will be sharing with us detail of his writing life, telling us all about his latest book ‘Gravedigger‘, which was released on 25th October 2015 and answering a few fun questions too. This post contains affiliate links.

Michael-Israel writes principally for Young Adults, which is what he intends to be until he’s very, very old. Further explorations of the genres he prefers to write in throw up fantasy, adventure, alternate history stories, and more. If possible, he prefers to write in a way that bends the distinction between different genres. Why shouldn’t the superhero trope take place within a fantasy novel? And however serious a book is, shouldn’t humour weave its way in?

Not really. I actually wrote for some time before I saw it is as a vocation.

I wrote books and talked to other people who also write books. Then I learnt how to self-publish and that’s what I did.

My average writing day involves Spotify, many glasses of water and the occasional video game break. I mutter to myself a lot.

The plotting comes later, usually after I’ve written plenty and the characters are getting into it. 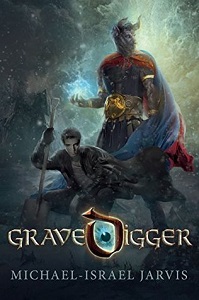 Dead or alive. Good or evil. Hero or fugitive. Valo needs a specific solution to a grave problem. The human Claimfold and prigon Torzsi draw apart. War is promised in the West. Worst of all, the magi of Nagyevo are meddling with the dead.

Perin is an apprentice Gravedigger: uneducated, unwanted, unsure. He may be the answer Valo needs, if he doesn’t get killed before he works out what’s going on. But of course there’s the chance that fate hasn’t called him after all.

The gods are nameless and silent and the best laid plans have a way of going badly wrong. Enter the spade and sorcery world of Valo. Gravedigger subverts the expectations of that oldest of foes in fantasy, the dead that walk, in a fast-paced adventure through a world of culture, intrigue, magic and blood.

Over four years, while I was at University.

No, but occasionally I suffered from writer’s wrists.

Perin presented itself. It has something to do with apples apparently, but I didn’t know that at the time. Kesairl and Medrivar were purely invented based on how they sounded to me. I used Hungarian as a reference language to help with the texture.

Perin could be played by someone like Rhys Matthew Bond.

For Medrivar, Ralph Fiennes as voice and motion capture performer.

Kesairl would have to be motion capture too. If Djimon Hounsou was a decade younger he’d be really good for this.

I had beta readers, yes. All were acquaintances and some are friends of mine, but I’m lucky to know people who are happy to be usefully critical.