The Virgin of the Wind Rose by Glen Craney – Book Review

The Virgin of the Wind Rose by Glen Craney – Book Review 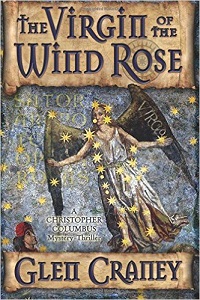 While investigating the murder of an American missionary in Ethiopia, rookie State Department lawyer Jaqueline Quartermane becomes obsessed with a magical word square found inside an underground church that guards the tomb of the biblical Adam.

Drawn into a web of esoteric intrigue, she and a roguish antiquities thief named Elymas must race an elusive and taunting mastermind to find the one relic needed to resurrect Solomon’s Temple. A trail of cabalistic clues leads them to the catacombs of Rome, the crypt below Chartres Cathedral, a Masonic shaft in Nova Scotia, a Portuguese shipwreck off Sumatra, and the caverns under the Temple Mount in Jerusalem.

Intertwined with this modern mystery-thriller, a parallel duel is waged:

The year is 1452. One of the most secretive societies in history, Portugal’s Order of Christ, is led by a reclusive visionary, Prince Henry the Navigator. He and his medieval version of NASA merged with the CIA scheme to foil their archenemies, the Inquisitor Torquemada and Queen Isabella of Castile, who plan to bring back Christ for the Last Judgment by ridding the world of Jews, heretics, and unbelievers.

Separated by half a millennium, two conspiracies to usher in the Tribulations promised by the Book of Revelation dovetail in this fast-paced thriller to expose the world’s most explosive secret: The true identity of Christopher Columbus and the explorer’s connection to those now trying to spark the End of Days.

‘The Virgin of the Wind Rose’ is an action thriller by American author Glen Craney, who hasn’t shied away from tackling some contentious issues as he takes religious tension, persecution, bigotry and conspiracy as his theme.

The writing style is clear, free-flowing and grammatically polished. The pace is fast with little time to dwell on backdrop scenery in the various international locations visited. The characters are well rounded and three dimensional with Jaq, the lead modern day protagonist, having a very colourful foil in the form of Elymas. Once their paths converge, the sparing and banter between them is highly entertaining, giving some humour as a contrast to the underlying darker messages.

The title of the book is intriguing and the cover design striking, both of which will encourage curious readers. Knowing little of fifteenth century international history, I did some internet searching to discover whether I was reading fact or fiction and now appreciate that the author carried out an enormous amount of background research for historical accuracy around which to weave his tale. There are many intriguing twists, turns and blind alleys as both Jaq in the contemporary story and Pero and his supporting cast in the fifteenth century, play out their separate journeys of discovery.

This is an unusual novel, taking stories from different eras and juxtaposing the two. There is an ‘Indiana Jones’ feel to the action and possibly to address this comparison, the author himself draws attention to it. The concept is extremely ambitious and I think the complexity of each story is such that both are strong enough to stand alone.

If you enjoy mystery thrillers, then I recommend this book, though you will need to concentrate to make sure you stay abreast of the action. I would hesitate to classify it as a light escapist read as in places the plot is intricate and challenging and doesn’t allow the reader to relax for a second.

I commend the author for a highly imaginative, thought-provoking and fascinating story and award ‘The Virgin of the Wind Rose’ five stars.

A native Hoosier, GLEN CRANEY is a screenwriter, novelist, journalist, and lawyer. He holds degrees from Hanover College, Indiana University School of Law-Indianapolis, and Columbia University’s Graduate School of Journalism.

As a member of the Washington, D.C. press corps, he covered national politics and the Iran-contra scandal for Congressional Quarterly magazine. His feature screenplay, Whisper the Wind, about the Navajo codetalkers of World War II, was awarded the Nicholl Fellowship prize by the Academy of Motion Pictures, Arts and Sciences for best new screenwriting.

His début historical novel, The Fire and the Light, received several honors, including being named Best New Fiction by the National Indie Excellence Awards and a Finalist/Honorable Mention Winner by Foreword Reviews for its Book of the Year in Historical Fiction. In 2014, he was named a double BOTYA finalist by Foreword Reviews for The Spider and the Stone and The Yanks Are Starving. He is also a two-time recipient of the indieBRAG Medallion.