This week on ‘The Writing Life of:‘ I am thrilled to be interviewing author Robynn E. Sheahan. Robynn will be sharing with us detail of her writing life, telling us all about her latest book ‘Storm of Arranon‘, which was released on 27th February 2013 and answering a few fun questions too.

So without further ado, say hello to Robynn.

I have always been a reader. I love books. When I’m not able to read, I listen to audio books.

I started writing while working as a Paramedic/Firefighter in Northern California. Trust me, it’s not like it appears on TV. There was plenty of time for books, mostly reading them. I didn’t seriously start writing until I moved to my ranch in Oregon. While waiting for lambs to be born in the middle of the night, I would head back to the house for an hour or two and sit down at the computer. Before I knew it, I had a manuscript. Not a good one, but a start.

I joined critique groups and attended writer’s conferences. I was on the fast track to learning. In 2013, I received an honorable mention in Writer’s Digest’s Self Published book awards for MG/YA. I guess I am learning something!

Ideas from dreams follow me into warm sunny days or the quiet of falling snow. “What ifs” feed a vivid imagination. Even mistyped phrases may lead to an “aha” moment. Brain storming sessions standing in windy, dark parking lots with fellow writers release thoughts that pry at the corners of my mind, grasping for purchase. Sometimes the ideas pursue me, with persistence.

I think my dream of becoming a writer happened gradually for me. After years of starting stories I’d never finish, and just kinda messing around with a little fan fiction, a certain group of characters started to demand more of my time. Erynn and Jaer. They had a story and they wanted it told. So, I did. Book five in the Storm of Arranon series gets underway in November NaNoWriMo.

I wrote, mostly a rambling mess of emotions and ideas. I read. I took writing workshops. I wrote some more, not quite so rambling. I joined critique groups. I read more. I attended writer’s conferences. I wrote even more. I won an honorable mention in Writer’s Digest’s Self-Published Book Awards in 2013 for MG/YA. Woo Hoo. I must be learning something!

I taught writing and publishing classes through the local library and led a group of young writers every other Saturday for almost two years. I learned a lot from them.

I love Dean Koontz. His descriptions of places and characters make me feel like I’m right there with them in the story.

First thing in the morning, I check my email. Then I check KDP and Amazon reviews. I know. I’m not supposed to worry about this, but it gives me a goal. Next comes FaceBook. I’m not good on Twitter or I’d spend more time there every day.

I usually work on revisions before doing any new material, interspersed with frequent visits to FaceBook, KDP, and Amazon. I spend a little time on promotions and marketing at least three days a week.

Strange writing habits, hmmm. I write with the TV on. The background noise helps, but I don’t know how strange that is. Oh, I can’t write with music playing. So that seems weird. TV okay. Music not okay. I keep wanting to sing along.

I use a computer, but I do have a digital recorder I carry with me for those moments when an idea strikes, or the solution to a plot problem reveals itself.

I love Erynn. I’ve put her through so much and she just keeps bouncing back. But in the first three books, I think Cale was my favourite character. In book four, I’m leaning toward a new character, Bryn. She’s snarky.

Oh my gosh, I’m a total pantser, as in I write by the seat of my pants. I do not outline. The characters lead the story. 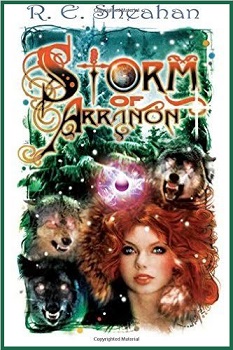 A brutal alien society invades Korin and Arranon, intent on destroying the two worlds that make up Cadet Erynn Yager’s home. Forced to expose her strange abilities and reveal her forbidden birth, a guarded web of secrets unravels.

Stranded on an unfamiliar planet of eternal winter and predatory wildlife, the mysterious living consciousness of Arranon intervenes, leading Erynn on a mystical journey.

Aware of Erynn’s potential, the alien enemy pursues her. She struggles to gain control of her growing powers while in a constant race to elude the invaders, and join the forces preparing to fight a mounting occupation.

Erynn’s secret may be her worlds’ only hope, but at the cost of her life. Swept up in a chain reaction of events, Erynn’s dedication extends far beyond service and duty. She learns the true meaning of sacrifice.

Along with courage and hope, Erynn finds something unexpected on her journey of awareness and growth.

This is actually a second edition of book one in the series, first published in 2012. The story is the same, but with some added scenes, and a new spine and back cover.

Book two was the worst. I kept asking Erynn to do things out of character and she refused. Once I allowed her to be who she is, the writer’s block disappeared.

Erynn has been in my mind for years, as has Jaer. They first showed up in a physical form, hair and eye color, body type, personality. I guess it’s kinda like when you get a new dog or cat. You live with them for a while and then they tell you what their name is.

I’ve replaced several of my characters with actors. Faylen is Vin Diesel. Cale is Liam Neeson. Jaer is a combination of Jason Momoa as Khal Drogo and Oded Fehr as Ardeth Bay. Tam is Zoe Saldana. But when it comes to Erynn, I’ve got nothing. She is just Erynn.

My work goes through critique groups, sometimes multiple times, an editor, a proofreader, and beta readers. Family is, well, family. They’re going to love anything you do. So no, not family. And I wouldn’t put friends in the uncomfortable position of reviewing my work.