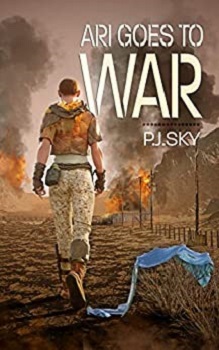 Ari Goes To War
The Adventures of Ari Book Two

In a distant future… A world divided… A wasteland at war…

In trouble with the Jackroller crime syndicate, and with the warlords of The Black Mulga on her tail, Ari must confront her past when she sets out across the war-torn wasteland to rescue Starla from the clutches of the infamous Bone Pointer.

‘Ari Goes to War’ is the second book to feature Ari and Starla from the pen of British author, P J Sky. The story is written in the third person and the past tense, with the story being told from the perspectives of several characters. The chapters are all of even length and fairly short.

Some time has passed since Starla was kidnapped from the city of Alice and taken to the wasteland. There she was rescued by Ari and returned to her father, the mayor and ruler of the city. Starla has been unsettled since returning and is now fully aware of the poverty that exists beyond the safety of the city walls. She is therefore determined to do all she can for the people on the outside. On route with alms, Starla’s plane is brought down and whilst the other survivors are left behind, Starla is kidnapped by a group who worship The Morning Star.

After her success last time, Ari is chosen by the ailing Titus Corinth to launch a mission to bring his daughter safely home. Ari joins forces with Keshia, a girl who lives on her wits on the streets of Bo, and we follow their adventure as they set out to find Starla.

There are some colourful descriptive passages as the girls encounter several different factions, each with their own agenda, who want to prevent a successful rescue.

The plot is uncomplicated so for readers who like lots of twists and turns and a climactic reveal, then it’s possibly going to fall a little short. Nonetheless, there’s a lot of drama and excitement, with Ari and Keshia having huge hurdles to clear before they can reach the disused mine, where Starla is being held.

To counterbalance the frantic action, there is a fair amount of soul-searching, with the main characters all examining their own feelings as well as the dynamics of their relationships with each other.

Although this story is a follow up to Ari’s first outing, readers are given sufficient backstory to read it as a stand-alone book. The author has used some interesting similes and metaphors which add depth. Sometimes a sequel can fall a little flat but hopefully young adult fans of Ari and Starla will enjoy their paths crossing once more. I award four stars.

P. J. Sky is a writer of short stories and novels, mostly in the post-apocalyptic and dystopian genre, for YA and adult readers. Born and raised in the UK, P. J. Sky wrote from a young age.

What did you think of ‘Ari Goes To War’? Share your thoughts in the comment section below!