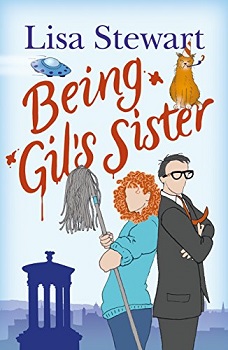 Sunny is outshone by her exceptional brother, Gil, but when he unravels faster than a spaghetti jumper, Sunny finds herself chasing love, aliens and a runaway nun to get their lives back on track.

For Sunny, it’s an interesting job being Gil’s sister. In fact, as we begin the novel, she is sort of making a career out of it. From walking Gil’s neighbour’s dog to cleaning Gil’s boss’s flat and many other tasks in between, Sunny has formed her own business, ‘Do Me A Favour’, helping out the local community through her Gil-formed connections.

And who is this famous Gil? Gil is Sunny’s older brother. Smart, successful, albeit with a geeky edge, Gil is the prodigal son, neighbour, colleague, friend that everyone loves: “Gil is a walking, talking cliché. He inherited the straight, dark hair and brains.” He’s so kind that he’s even let Sunny live with him rent-free, as long as she does his shopping and cleaning.

Despite this, Sunny’s tired of always being just Gil’s sister. A disappointment to those around her when they ask if Gil’s with her and she says no. Constantly met with attitude until she tells someone who her brother is. To his “cliché-ness”, Sunny is unconventional: “I inherited the wild auburn curls, freckles that join together when the clocks spring forward and an unhealthy wanderlust.”

Where Gil works the conventional 9-5 at a design company, Sunny is organising a cat’s birthday party (and not particularly well). They couldn’t be more different. However, one thing they do have in common is Mathew, Gil’s best friend, who just happens to be the love of Sunny’s life. He just doesn’t know it yet. Then there’s Campbell, Gil’s boss who has taken a rather unwholesome shine to Sunny, hiring her as his cleaner.

But things take a rather bizarre turn when Gil suddenly stops being so… normal. Missing meetings, sleeping in, going out every night, it doesn’t take long for Sunny to notice something’s wrong with Gil. With the balance tipped, it’s seemingly Sunny’s chance to live up to her name and use her spirit to work out what’s going on and how to fix it. It’s just that’s she’s also been hired to fix a great deal of other things as part of her job at ‘Do Me A Favour’, including finding a runaway nun… She’s also intent on fixing her love life, set on making a go of things with the handsome, perfect Mathew.

In Being Gil’s Sister, Lisa Stewart offers us a selection of kooky characters, with lots of humorous plots thrown Sunny’s way. Some of the shenanigans Sunny finds herself are completely cringe-worthy and absolutely nonsensical. Shenanigans that are only topped by the discovery of Gil’s nighttime activities.

However, the novel also portrays depression, its causes and effects, much to the contrast of these farcical situations. Mathew, Sunny’s ‘perfect’ man, reveals that he has suffered from mental illness, and it’s clear that Gil, who was once so together is clearly going through something similar.

Written in first person, it’s great to get Sunny’s insights on all these moments, whether positive or negative. As Mathew tells her, she has a positive outlook on life that helps frame her experiences for the reader. Her wit keeps the pace of the novel, and her self-pity, mostly at being Gil’s sister (and therefore apparently unsuccessful in one way or another), is funny to follow. The novel could benefit from more twists in the plot overall, opportunities for Sunny to flourish. Despite the outlandish moments, there doesn’t seem to be the character development that I craved for Sunny throughout. That said, Being Gil’s Sister is a fun read, with great observations from Sunny.

She attended Woodmill High School in Dunfermline – her favourite memories being of the hillwalking club, trips to the Edinburgh Fringe and school discos. She left school at five feet two, graduating from Queen Margaret University three years later and three inches taller.

Lisa has worked in NHS Lothian for many years – her best friends making a half-decent multidisciplinary team, although short of orthopaedic surgeons.

Lisa wrote her first novel ‘Soup Is The New Coffee’ in 2002, followed by ‘Being Gil’s Sister’ in 2004. Unsuccessful in getting a publishing deal – the rejection letters being used to stuff a king-size mattress – she turned her attention to non-fiction. She completed a Masters degree, also at Queen Margaret University, and published her assignments in professional journals.

A casual question from her mum, ‘What are you doing about your books?’ spurred her back to the word-processor. She re-wrote ‘Being Gil’s Sister’ and published it on Kindle Direct Publishing in 2012.

Lisa likes to have fun with her novels and blogs. She enjoys creating characters whose stories are amusing and absurd. Her fourth book ‘Camp Crackers’ follows siblings Sunny and Gil (Being Gil’s Sister) in a summer holiday countryside caper. Their story bears no similarity to summer and even less to a holiday.

Lisa lives in Edinburgh with her husband and son, where a quiet evening can carry the screeching and squawking of wild animals. That would be the zoo, as opposed to the Stewarts fighting over the hair gel.