Death in a Bookstore by Augusto De Angelis – Book Review

Death in a Bookstore by Augusto De Angelis – Book Review 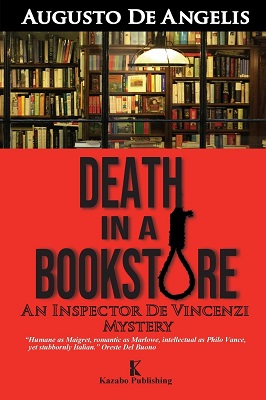 Death in a Bookstore
An Inspector De Vincenzi Mystery

When the clerk arrived to unlock the bookstore on Via Corridoni, the last thing he expected to find inside was a dead Senator. . .

Now Inspector De Vincenzi has been assigned the case and the only clue is a missing copy of a rare book, La Zaffetta, taken from the room where the Senator lies dead. The Senator’s murder is a live hand-grenade with no pin and the Superintendent has given Inspector De Vincenzi eight days to solve the murder . . . or else. As the bodies begin to pile up, supernatural forces seem to be at work. But it was no spirit that put a lead slug in the back of Senator Magni’s head.

Death in a Bookstore, one of De Angelis’s best novels, is a psychological tour de force. Inspector De Vincenzi, “the first authentic Italian detective,” doesn’t just track down clues, he gets inside the heads of his suspects, with often stunning results. “You disregard evidence . . . appearances . . . earlier crimes. You disregard motives. You observe people, question them, examine them, judge them with your psychological method and then set them free, having decided that they cannot be guilty, because they lack the moral, intellectual, temperamental, or emotional capacity to commit a murder, this murder . . . Where will we end up, De Vincenzi? Your obsession with the psychology of murder is madness!”

Milan, perhaps the most cosmopolitan city in Italy, is almost another character in Death in a Bookstore. While the story is a work of fiction, the setting is not. De Angelis meticulously describes streets and parks, restaurants and cafés, even buildings, most of which are still perfectly recognizable. It is a moving, almost eerie, experience to use Google Street View to step out of police headquarters and walk the streets of 1930s Milan with Inspector De Vincenzi at your shoulder.

While new to English readers, Inspector De Vincenzi is immensely popular in Italy, and is the protagonist of several best-selling novels as well as two Italian television series.

Kazabo Publishing specialise in English translations of worldwide classic fiction which has not previously been translated. Death in a Bookstore by Augusto De Angelis is one such work that really deserves access to that audience.

As is often the case with classic novels the background information is very useful and this is provided as a foreword by Joshua Sinclair, medical doctor, theologian, film maker and grandson of the author, Augusto De Angelis. In it he explains that De Angelis was a renowned and respected Italian journalist in the early part of the 20th Century. During his career he interviewed Benito Mussolini three times and sadly lost his life when he was beaten to death by Fascists in 1944.

Sinclair also explains that during the 1920s and 1930s the Fascist Government frowned on any literature that was critical of society or state organisations. Italian fiction was apparently lacking a home grown detective to rival Sherlock Holmes, Hercule Poirot, Ellory Queen or Maigrat.

De Angelis added to that mix with Inspector De Vincenzi who compares very well with Maigrat; quiet, pensive and unrushed. He works through a number of suspects treating them all with respect; quite possibly in contrast to the reality of 1930’s Italy. The plot is intriguing and stretches across all of Milan’s society.

The real star of the book is the city itself. De Angelis paints a wonderful image of 1930’s Milan as the story wanders through its various settings, most of which are believed to be real streets and buildings. It certainly has the potential to make a beautiful movie.

The denouement had a ring of familiarity about it but as the story was written over eighty years ago maybe this was the original. Who cares, the winners will always be the investigation, the period, the city and the characters.

Augusto De Angelis was an Italian novelist and journalist, most famous for his series of detective novels featuring Commissario Carlo De Vincenzi. His cultured protagonist was enormously popular in Italy, but the Fascist government of the time considered him an enemy, and during the Second World War he was imprisoned by the authorities. Shortly after his release he was beaten up by a Fascist activist and died from his injuries.

What did you think of ‘Death in a Bookstore’? Share your thoughts in the comment section below!