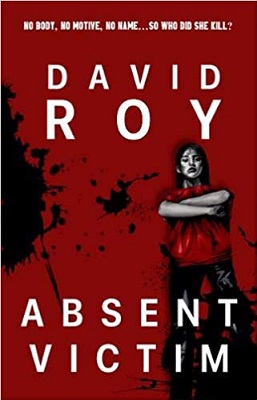 No body, no motive, no name…so who did she kill?

When wealthy divorcee Stephanie Kuler asked a private detective to investigate a murder, he told her to go to the police instead. But when she told the rest of the story, he took the case.

There was no body, no reason to kill and no name for her supposed victim, but she knew she was the murderer. Solving the mystery meant jail for her and a headache for him. Premonition, false memories, deja vu…the mind playing tricks or reality distorted through time? The unmissable new thriller from David Roy explores the dark side of memory and its impact on us all.

You would probably tell them to go to the police, but what if this person had already been to the police station and the police in not so many words told them to go away. Would you agree to help them discover their past knowing that if you prove they did kill someone that they would go to prison for a long time?

Told from the point of view of the private detective (who I don’t think is ever named) who has been given this exact circumstance by wealthy client Stephanie Kuler. He has reservations about taking the case but the money would come in handy. However, the case already strange gets far weirder as the plot progresses.

Alongside the main plot runs several subplots and there are also several other characters who are vital to the story, including the PIs sidekick Billy and his ‘Billie-isms’.

The book took a little getting used to at the beginning as our main character talks directly to you, explaining what is happening, happened, and quite often in a jovial manner, not quite what I was expecting from a thriller, in fact, I’m not too sure I would call it a thriller, more of a mystery novel.

The storyline heavily features Covid-19/pandemic references and the main character’s thoughts on the situation plus how he views certain things in society, such as the news channels, etc. Part of me did wonder if this was a way for the author to get across his feelings on these subjects across without coming out with them directly.

Absent Victim was an enjoyable, fast-paced read that contained a unique plot, one that has you guessing right to the very end and then left you with another idea to digest. I was kept entertained until the very last page especially with the humour and sarcasm which featured heavily throughout.

David Roy was born in Bangor, Northern Ireland in 1965. After a number of years in the army he left a life in uniform to read for a degree, ultimately qualifying as a secondary school teacher. He is the author of many books, the first written in 1994 as an account of his service in the first Gulf War. His book ‘The Lost Man’, the first of his Ted Dexter adventures, featured on ITV’s ‘The Alan Titchmarsh Show’ where it was shortlisted in the ‘People’s Novelist’ competition.

As well as being a soldier, David has been a dishwasher, a teacher, a civil servant, a security guard, a welfare assistant and an ambulance crew member. He is married and now lives in England with his wife and two daughters.