Raven, Fire and Ice by Nita Round – Book Review

Raven, Fire and Ice by Nita Round – Book Review 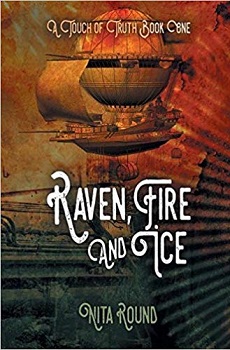 Raven, Fire and Ice
A Touch of Truth Series Book One

Lucinda Ravensburgh sees the truth in everything she touches. When Captain Magda Stoner of the airship Verity, asks for her help in a very strange and messy crime, Lucinda cannot refuse.

From that moment on, Lucinda’s life is changed forever. She discovers, no matter what the obstacle, nor the troubles they encounter, finding the truth is paramount.

Raven, Fire and Ice is the first book in A Touch of Truth Series by Nita Round. It follows the story of Lucinda Ravensburgh a Tower Witch, who is also a psychometrist, (in short the ability to read objects) and the lead on Rainbow Tower. I do not pretend to understand her special gifts/skills and I think my brain tuned out when it believed the concept would be too difficult, however this did not stop me from liking the character of Lucinda and being invested in what happened to her.

Lucinda is tasked with working with Captain Magda Stoner and Ascara, a security officer. Captain Stoner asked for her help in finding out why the people of Wash Town are disappearing, but was particularly secretive about all that it would entail. I liked the relationship that develops between the three of them, it made for interesting reading. I got the sense that they cared for each other in their own unique ways and humour was part of the mix too. And because they cared I cared too.

I particularly liked the way the book ended with dialogue, so you are left with no uncertainty there is more to come, though this being the first in a series should also give let you know that too!

I believe the book fits the series title A Touch of Truth perfectly. If you want a book that will stretch your imagination and contains strong leading female characters, then this is one to read. It is a Steam Punk novel and has essences of Fantasy, Dystopian and Sci Fi too.

Nita has been writing all of her life in one form or another, and she loves telling stories. Her head is full of them, and they all scream for her attention. Chosen as one of the winning entries in a short story competition, publication was the catalyst to write more, and now writes full time.

She loves being outdoors in the garden, or visiting sites of National heritage, but she also loves reading, cooking, gaming and no matter what, she always finds something to do. She lives in the heart of England with her wife of 22 years and their King Charles Cavalier, Rosie (also known as “Ya-bugger!)