The Boy from Mars by Simon James – Book Review

The Boy from Mars by Simon James – Book Review 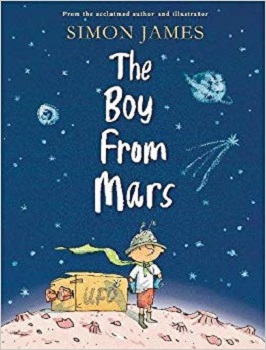 The Boy from Mars

The day that Stanley’s mum had to go away, he decided to go to Mars. In his place, a not-very-well-behaved Martian arrived. He looked just like Stanley, but he wouldn’t eat his vegetables, he wouldn’t clean his teeth and he certainly didn’t play nicely in the playground.

Dad’s not sure what Mum will think when she gets back. Will the martian still be there, or will the real Stanley get back in time?

The Boy From Mars is all about a little boy called Stanley whose mum has to go away with work for the night. Stanley decides whilst his mum is away he is going to fly to Mars and whilst he is there a Martian who looks just like Stanley will take his place at home.

The little Martian doesn’t understand how to behave on Earth. He won’t wash his hands, brush his teeth, eat his veg and he gets told off at school. The Martian isn’t very nice and dad just hopes that by the time mum arrives home that he will have gone back to Mars and that Stanley will have returned.

This is a story about a little boy who is clearly upset that his mum is going to be away for the night and doesn’t understand how to channel his emotions properly so rather than let people know he’s upset he has a novel idea, he zoom off to Mars and let a Martian who looks just like him take his place. Plus, because the Martian isn’t from Earth he won’t have to do what Earthlings do and he can get away with being moody and not doing as he is told.

Everyone knows that the Martian is really Stanley pretending but they play along (all except Josh at school), as they understand what he is doing and why. The ‘Martian’ isn’t really bad, he’s just pushing his luck by trying to get away with not doing the things he’s told too. No harm is done until the Martian goes to school and pushes someone who won’t believe he’s not really Stanley.

Personally, if I was Stanley’s parent I would have played along too until the school incident and then I would have told him that enough was enough, not washing your hands is one thing, pushing a child and hurting them is something completely different.

Little children are still learning how to deal with emotions and this may have been the first time that Stanley’s mum had ever left him overnight. He would have been scared, upset and quite possibly feeling abandoned, hard emotions to deal with as an adult, never mind a small child.

This is a very sweet book that had some beautiful illustrations to accompany the plot. It would make a perfect bedtime read.

Simon James is an award-winning author and illustrator of picture books for children. His critically acclaimed titles include Rex, Frog and Beaver, George Flies South, the Baby Brains series, Dear Greenpeace, The Wild Woods, The Day Jake Vacuumed and Leon and Bob, which won the Smarties Book Prize Silver Medal and was nominated as the New York Times’ Best Illustrated Book of the Year. Simon lives in Plymouth, Devon.