By A Thread by Nyna Queen – Book Review 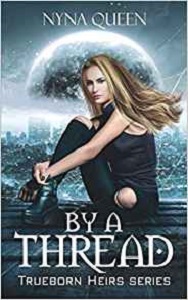 By A Thread
The Trueborn Heirs Series Book One

“I’m a spider, sugar. My shaper kind doesn’t bear that name for nothing.”

That’s not something Alexis Harper dares to say very often. If she did, it might just get her killed. Not that she is an easy mark, but even fools get lucky once in a while.

In a world where the magically gifted trueborn rule and the magicless halfborn slog away in the slums, half-blood mongrels like Alex are outcasts—feared and shunned. For most of her life, she has lurked in the shadows, trying to keep her true nature a secret. But the secrecy ends abruptly when she saves two trueborn aristo children from a group of hired killers.

Accused of a crime she didn’t commit, Alex suddenly finds herself running from powerful enemies, with no one around to trust. Or what about the mysterious stranger who has been following her? He is one of Death’s Servants, born and bred to kill at the country’s command. Not the most preferable ally, but then, her choices are limited. Soon she has to decide whether she can trust him or not—it’s a gamble she might not survive either way. And before Alex knows what is happening, her life is hanging by a silken thread…

By a Thread is an exciting urban fantasy with a strong heroine in an intriguing world. Unfortunately, it suffers a bit of an identity crisis due to a heavy romance subplot. Yet, the book really drew me in. It’s very fun and the quest narrative keeps the plot moving.

The prose could be tightened. Especially during a character’s inner thoughts, the second sentence could often be dropped. Interesting metaphors are bogged down by a repeated and less effective reiteration of the same concept. This happens far more in the first quarter of the novel; the book comes into its stride around 15%. Perhaps because of this, the novel doesn’t really shine until after the inciting incident. After this point, it’s very hard to put down.

Alex is a strong, stubborn, conflicted character with an interesting place in the world. Her powers are revealed in bits as the story progresses, which keeps you interested. The world is fleshed out in the same way, but it is less effective. Classism plays a strong role, often propelling and stalling the characters, but the clear focus on that social issue left me with some questions about race and gender in the world-build that were not addressed.

The supporting characters are fun. The children are perfectly wrought. The boy is cute but not precocious and the girl is as likeable as a young teenager with an attitude can be. Draken, the love interest, was a little too much of Romance archetype for my taste. He’s dangerous and sexy, kind and arrogant. I didn’t dislike him, and I enjoyed the chemistry he and Alex had, but I fond him a little … much.

In terms of the romance, the growing attraction is not as subtle as I prefer, but the author does a great job balancing their irritation with their attraction to one another.

The action scenes in the novel are very well executed – they were the sharpest and most concise sections and I was never unsure what was going on. There is a good amount of tension in the novel and you care what happens to the characters.

Overall, once the novel gets going, it’s an exciting, fun ride.