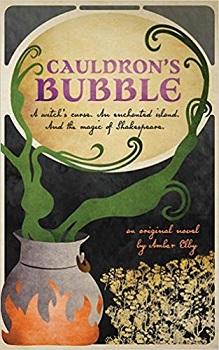 Imagine that Shakespeare’s characters could interact off-stage and that their adventures could span beyond the bounds of the Bard’s fiction: Hamlet deviously escapes from the pirates who capture him on his way to England; Macbeth’s witches perform their magic on unsuspecting victims; and a shadowy figure awakes from the backstory of The Tempest.

These stories and more come to life in Cauldron’s Bubble, as readers explore the worlds of Shakespeare’s plays with an orphan girl named Alda and a cabin boy called Dreng, who each search for something lost.

Alda discovers a magical bubble that transports her to witches on a moor. Dreng, meanwhile, saves a prince. They are finally united on an enchanted island, where Alda is on a quest to free a magical being, and Dreng is smitten with a mysterious young woman. Ultimately, Alda must find power she gained in a forgotten realm to defeat a dreadful summoner, and Dreng must awaken to the realities around him before they are both consumed by magic.

Fourteen-year-old Alda has just buried her beloved Grandmother who she lived with in a cottage on Seventh Island. Whilst sobbing at the kitchen table, the herbs that were sat on the table rearrange to spell the word ‘Cloak’. Alda jumps up and grabs her Grandmother’s cloak and searches it, finding a marble-sized iridescent sphere in one of the pockets.

Alda holds the sphere tight to herself and soon finds that she is sat on a ship in the middle of the sea watching a young boy, before reappearing back at the cottage. Alda learns that the sphere is a time-travelling device called ‘Cauldron’s Bubble’.

Over time Alda travels to some strange, inhospitable, and dangerous realms searching for her true self, one factor is always present though, the young boy she saw on the ship. Who is this young boy and what is their connection?

Cauldron’s Bubble is the first book is the Netherfeld Trilogy, all the other books in the series have been released. The story is told in the third person and follows Alda as she travels through time and goes on adventures dealing with witches, curses, pirates and much more.

The book has been artistically and very cleverly written. The author Amber Elby certainly studied hard to make the book as perfect as possible, especially when it came to the Shakespearean characters that make an appearance. It is also a great introduction to Shakespeare for young adults that are either studying the Bard’s plays or will be soon.

The tiny little issues I have with the book are that there are no illustrations throughout, which judging by the market the book is aimed at and the content I did expect and feel would make the book even more enjoyable. The other relates to my paperback copy in that the text was small and it was written on a pure white background which did hurt my eyes and meant I had to put the book down roughly every couple of chapters.

However, the above did not distract from the fact that the plot is most certainly fascinating and that this is a near-perfect debut that is exciting and keeps the reader on their toes the whole way through, it is also a fast-paced novel too meaning you’ll have to keep up with it!

Amber Elby was born in Grand Ledge, Michigan but spent much of her childhood in the United Kingdom. She began writing when she was three years old and created miniature books by asking her family how to spell every, single, word. Several years later, she saw her first Shakespearean comedy, Much Ado About Nothing, in London.

Many years later, she studied Creative Writing at Michigan State University’s Honors College before earning her Master of Fine Arts degree in Screenwriting at the University of Texas at Austin. She currently resides in Texas with her husband and two daughters and spends her time teaching, traveling, and getting lost in imaginary worlds.