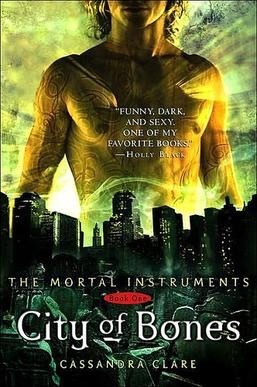 When fifteen-year-old Clary Fray heads out to the Pandemonium Club in New York City, she hardly expects to witness a murder much less a murder committed by three teenagers covered with strange tattoos and brandishing bizarre weapons. Then the body disappears into thin air. It’s hard to call the police when the murderers are invisible to everyone else and when there is nothing, not even a smear of blood to show that a boy has died. Or was he a boy?

This is Clary’s first meeting with the Shadowhunters, warriors dedicated to ridding the earth of demons. It’s also her first encounter with Jace, a Shadowhunter who looks a little like an angel and acts a lot like a jerk. Within twenty-four hours Clary is pulled into Jace’s world with a vengeance, when her mother disappears and Clary herself is attacked by a demon. But why would demons be interested in ordinary mundanes like Clary and her mother? And how did Clary suddenly get the Sight? The Shadowhunters would like to know…

Clary had a normal life, or that’s what she had been led to believe by the powers of memory erasing. When she witnesses the murder of a ‘blue haired’ boy in a night club by three attackers, no one else seems to of seen anything, and she goes home confused.

The next day her mum announces that they are leaving New York, right away. Angry at her mum, she runs off with her best friend, Simon.

Whilst they are sat in the local café, she notices one of the attackers from the night club, Jace, walk past the window, and goes out to follow him. Jace doesn’t understand how she can see him. He tells her that he is a Shadowhunter and that he can only been seen by others from his world or if he chooses to be seen.

Whilst talking to the Jace, Clary receives a frantic call from her mum telling her not to come home. Doing exactly the opposite she races home, followed by Jace and finds it trashed, her mum gone and a strange hissing creature heading towards her. After a battle she manages to kill the creature, but not before it has stung her.

With Clary now in grave danger, being infected by a demon, Jace does the only thing he can think of – he takes her to the New York Institution, the home for Shadowhunters, so that they can help cure her.

This is the start of Clary’s journey into a world that runs parallel with the mortal world, a world full of warlocks, witches, vampires, werewolves, faeries, demons and of course Shadowhunters.

If she’s going to find out what has happened to her mum, she must first discover who she truly is, and learn to fulfil her full potential.

‘City of Bones’ is the first book in The Mortal Instruments series. The books are aimed at the YA genre, but I was so enthralled by the plot and the hype around the book that I decided to read it.

It’s a story of mystic, magic, romance, action, adventure, hate and anger all thrown in together. The plot develops slowly, chapter by chapter and we are kept continuously surprised throughout the book with each new development.

Clary is the protagonist, and even with her being only fifteen I found her enchanting, full of energy and she clearly is determined a young lady, wise beyond her years.

Jace is very head-strong young man who’s had to fight all of his life, making him quite stubborn and set in his ways. Then along came Clary, giving him feelings that he’s never experienced before, and he finds himself attracted to her.

With the added bonus of a kick-ass female with a whip, Izzy, and her older, seriously moody brother Alec, along with geeky Simon, the book is full of well thought out characters, who work well together and are not overshadowed by the protagonists.

I love this book, even though it isn’t aimed at my age group, I found it engaging and mysterious. I love the idea of a world we can’t see, but exists along side us.

The action and adventure fill the book and Cassandra’s eye for detail throughout make visualising the scenes easy. There is also the obvious attraction that Clary and Jace have for each other running ever present in the background of the story, creating that ‘will they, won’t they?’ suspension.

I have since read the entire collection and have loved all the books, although when you discover the time frame that the whole series has been set in, it does seem a bit far fetched for so much to happen in such a short amount of time.

The book has since been adapted in to a movie, which I can honestly say I wasn’t impressed with. The characters weren’t how I imagined them, and there is a lot of the plot missing, including many key parts of the story.

There is also a series on Netflix, ‘Shadowhunters: The Mortal Instruments’.

Cassandra Clare was born overseas and spent her early years traveling around the world with her family and several trunks of fantasy books.

Cassandra worked for several years as an entertainment journalist for the Hollywood Reporter before turning her attention to fiction. She is the author of City of Bones, the first book in the Mortal Instruments trilogy and a New York Times bestseller.

Cassandra lives with her fiancé and their two cats in Massachusetts.