When we moved to West Virginia right before my senior year, I’d pretty much resigned myself to thick accents, dodgy internet access, and a whole lot of boring… until I spotted my hot neighbor, with his looming height and eerie green eyes. Things were looking up.

AND THEN HE OPENED HIS MOUTH

Daemon is infuriating. Arrogant. Stab-worthy. We do not get along. At all. But when a stranger attacks me and Daemon literally freezes time with a wave of his hand, well, something… unexpected happens.

THE HOT ALIEN LIVING NEXT DOOR MARKS ME

You heard me. Alien. Turns out Daemon and his sister have a galaxy of enemies wanting to steal their abilities, and Daemon’s touch has me lit up like the Vegas Strip. The only way I’m getting out of this alive is by sticking close to Daemon until my alien mojo fades.

IF I DON’T KILL HIM FIRST, THAT IS

Katy Swartz and her mum Kellie, are the new folks in town, moving to West Virginia after Katy’s father died.

Katy’s mum was concerned about her starting at the local high school with no friends, so encouraged her to get out and make some, starting with their neighbours kids.

Needing directions to the local grocery store gave her enough reason to knock on their door. After asking the young lad for directions, she’s left with the opinion that they have moved next door to the most obnoxious, rude, big headed boy in the world, Daemon Black, who also happens to be the most gorgeous boy she has ever seen, with mesmerising green eyes.

Whilst out shopping Katy runs in to Dee, Daemon’s sister. Dee and Katy hit it off immediately, but Daemon isn’t happy about their friendship and warns Katy to stay away from his sister.

A few days later after another argument with Daemon, Katy runs away from him and straight into the path of an on coming truck, Daemon freezes time to protect her, and this is the beginning of her discovery of the world of the ‘Luxen’.

There now just one problem, in saving Katy’s life Daemon has placed a ‘trace’ on her, meaning that she is lit up so that every other Luxen on Earth can see her, and the ‘Arum’, who want to kill all the Luxen and can now use Katy to get to them.

Before reading this book I can honestly say – aliens, not my thing. Never contemplated reading a book with aliens in before, but when I saw this book, something drew me in and I had this urge to read it. I’m so glad that I did.

The book is like an ‘A’ ride at the theme park. It starts you off slowly, but before you’ve had time to take a few breaths your whizzing through the book, and the pace gets quicker and quicker. There is so much packed into the book. Fight scenes, romance, sexual chemistry, paranormal activity, and wit – lots and lots of wit.

The dialogue between Katy and Daemon will have you in stitches. They work so well together and really bounce off one other. Yes Daemon is moody and arrogant, well as being hot. He’s also also caring and loving, and will do anything to protect those he loves.

Katy is your average teenage girl. She loves reading, and even has her own book blogging site. She is smart, head strong and can hold her own in dangerous situations.

Then there’s Dee, she is so sweet, and quirky (she reminds me of ‘Luna Lovegood’ in Harry Potter). She loves anything, if it’s pink, and is completely daft.

I’ve heard this book has been likened to the ‘Twilight Saga’. I haven’t read the books, but have see the films, and I can see where they are coming from, but I feel that this book really holds its own.

It is phenomenally good and is hard to put down. It’s was one of those books, that once it had ended – on a cliff hanger – I had to start the second one right away, luckily I had it prepared.

With so much going on in the book, you will find yourself drifting into a world where aliens are amongst us, and I wouldn’t mind bumping into an one, especially if he looked like Daemon! 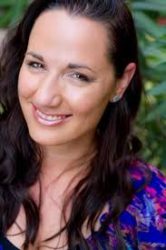 When she’s not hard at work writing, she spends her time, reading, working out, watching zombie movies, and pretending to write. She shares her home with her husband, his K-9 partner named Diesel and her hyper Jack Russell Loki. Her dreams of becoming an author started in algebra class where she spent her time writing short stories, which explains her dismal grades in math. Jennifer writes Young Adult Contemporary, Urban Fantasy/Paranormal and Romance. She writes New Adult and Adult romance under the pen name J.Lynn.