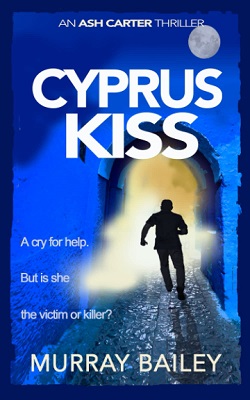 Help Me! Those were the words on the back of a woman’s photograph. And yet she vanished six months ago. It’s 1948 and military investigator Ash Carter has arrived in Cyprus. A gang has been operating for two years, leaving a mark known to police as the kiss of death. Is this something to do with them? And why ask him for help?

After a murder, Carter begins to realize this is personal. In a race against time, Carter must work out the connection between the gang, the missing woman and the murder, before it’s too late.

Cyprus Kiss is an amazing thriller set on the island of Cyprus in the late 1940s. Military investigator Ash Carter, our protagonist, has just been posted there from Palestine to help Captain Bill Wolfe with some undercover work.

Whilst the pair are waiting for instructions, Carter receives a photo of a young woman with “help me!” written on the back. At a loose end, he decides to look into it but it isn’t as easy as he thought it would be, and ends up in some very sticky situations.

I loved all the details of what Cyprus was like back in the 1940s, including the cultures, the people, and also the gangs that had formed there. The storyline was well-written with good use of descriptive language. The plot was so utterly thrilling, it kept me guessing the whole way through. This is a definite page-turner.

Cyprus Kiss had everything I wanted within it, including murder, mystery, and love. The characters came across realistic and I adored the setting. It also contained plenty of twists and just when I thought I had it all worked out, another was thrown in, brilliant!

I highly recommend this novel and I now look forward to reading author Murray Bailey’s next book in the series, The Killing Crew which is released next year. Well done Murray Bailey for writing such a tremendous thriller.