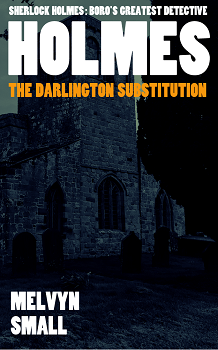 With Watson’s literary career going from strength to strength, he secures a slot on local radio to publicise his new book. Uncertain as how to well it went, he is still a little surprised when the recording isn’t broadcast. Although disappointed, he disregards this snub to his confidence as a peculiar but unimportant bend in the path of his literary career.

Sherlock Holmes is not so dismissive. He seizes upon the event, certain that there is more to this rebuff than meets the eye. He grills Watson to the content of his interview, convinced a key fact will reveal all. There is nothing. Watson is sure off that. An investigation ensues that takes Holmes to the end of the known world, a place just near Thirsk.

The Darlington Substitution is a retrospective account, occurring during the same time as the adventures chronicled in Holmes Volume 2. It sees Holmes at the height of his wisecracking, foulmouthed, law disregarding deductive brilliance.

For anyone who loves Sherlock Holmes, Melvyn Smalls books are for you. He has taken Sherlock and given him a modern day makeover, without taking anything away from the sleuth that we know and love, except maybe that he now resides in Teeside.

Dr. John Watson has written a book about the cases that he and Sherlock Holmes have worked on together. When he’s invited to talk about his book on the local radio station, BBC Tee, he jumps at the chance. However, on the day it was scheduled to be aired another author’s work is showcased instead.

Watson, clearly not happy tries to find out why his slot on the show was pulled, but all he is told is that it has been deleted. Holmes, though thinks that there is more to it, especially when it turns out that Watson spoke about a case that could be related to the DJ, Charlies Darlington. With Sherlock on the case, you can be sure that no stone will be left unturned until he has the answer he is looking for.

The Darlington Substitute is a novella that is split into twelve chapters, all of which you can read for free via the link below. A chapter will be released, one at a time.

Melvyn Small’s writing is superb. He has managed to capture every mannerism, and off the cuff remark, just as you would of expected from the original Sherlock in Sir Arthur Conan Doyles books. The whole book is around 65 pages long, so it only took me about an hour to read it. It really is a fantastic novella and I fully enjoyed it from beginning to end.

Click the link to start reading The Darlington Substitution for free – www.indipenned.com

Melvyn Small is an author and the founder of Indipenned, a website that champions the work of independent literature. Thus far he has written two books, Holmes Volume 1 and the imaginatively titled follow up Holmes Volume 2 (Subsequently republished by Fahrenheit Press as the Victor Locke Chronicles).

Mel’s perhaps unique spin on Sherlock Holmes, which places the character in a different time, location and section of society, has found fans around the world and is fast becoming a cult classic.

His writing style is pacey and littered with gin-dry humour. It has been described as “hilarious, clever and hugely enjoyable.” The Darlington Substitution novella is his longest story so far and perhaps his best work to date. 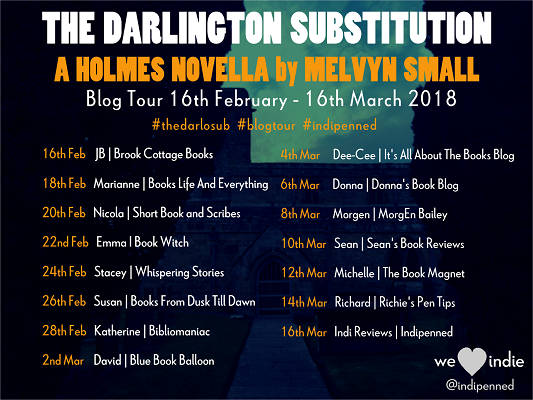