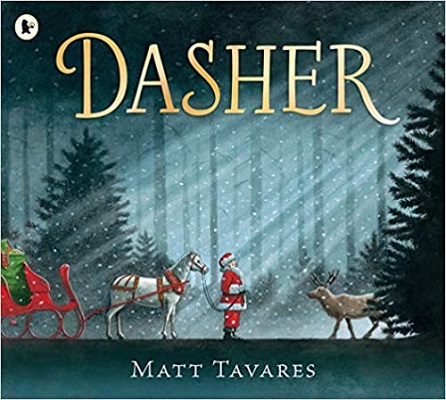 Discover the magical story of Dasher, Santa’s very first reindeer, in a Christmas gift-book to treasure year after year.

Dasher is a little doe with a wish in her heart. She spends her days with her family under the hot sun in a travelling circus, but she longs for a different life – one where there is snow beneath her hooves and the North Star above her head.

One day, when the opportunity arises, Dasher seizes her destiny and takes off in pursuit of the life she wants to live. It’s not long before she meets a nice man in a red suit with a horse-drawn sleigh, a man named Santa. And soon, with the help of a powerful Christmas wish, nothing will be the same… Matt Tavares’ beautifully illustrated and evocatively told story bristles with all the magic of the festive season.

Dasher is the story of how a brave little Doe changed Christmas forever. Dasher was working at a travelling circus in horrible conditions with her family. She hated it there with the horrible circus owner. Her Mama told her a story about how she used to live in a place where the snow covered the ground and the North Star was above her head. Dasher longed for that life.

One night she managed to get out of her pen. She ran and ran for hours following the North Star but it never seemed to get any closer. Confused and alone she heard a noise and came across Santa and his horse Silverbell who pulled his sleigh. The sleigh was too heavy just for one horse this year and Silverbell was struggling. Dasher offered to help and was surprised when she was no longer running on the ground but was flying in the sky.

This is the story of how the reindeer came to pull Santa’s sleigh. It is heart-warming, beautiful, and I loved every minute of it. The full-page illustrations are simply divine and make the story so enjoyable.

It has a magical feel to it and makes you feel all warm and fuzzy whilst reading it. You will find yourself routing for Dasher and her family, hoping that they manage to get away from the travelling circus and to live in a place that they love and have better conditions.

The book is not only the perfect festive read but it includes a message within to all children about family love and having courage. With its relaxing tones, this would make a sweet bedtime read for Christmas Eve.

Matt Tavares was born in Boston, and grew up surrounded by books and reading. From the time he was very young, his mother read to him every night, and his family made countless trips to the public library. Years later, as a studio art major at Bates College, he rediscovered his love for picture books, and decided to try to make his own.

Since then, Matt has published eighteen more books and has won several awards, including three Parents’ Choice Gold Awards, an Orbis Pictus Honor, and two ALA Notable books. His artwork has been exhibited at the Museum of American Illustration, the Brandywine River Museum, and the Mazza Museum of Picture Book Art.

When Matt’s not working in his studio on his latest book project, he travels the country speaking (and drawing) at schools, libraries, conferences, and bookstores. He has presented at the Smithsonian American Art Museum, the Eric Carle Museum, the White House Easter Egg Roll, and he’s even done a few book signings at Fenway Park.

Matt lives in Maine with his wife, Sarah, and their two daughters.