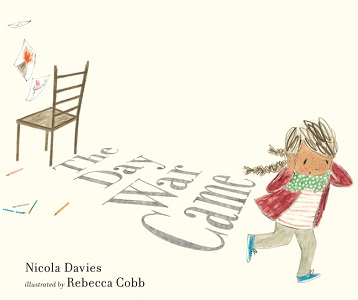 Imagine if, on an ordinary day, war came. Imagine it turned your town to rubble. Imagine going on a long and difficult journey – all alone. Imagine finding no welcome at the end of it. Then imagine a child who gives you something small but very, very precious…

When the government refused to allow 3000 child refugees to enter this country in 2016, Nicola Davies was so angry she wrote a poem. It started a campaign for which artists contributed drawings of chairs, symbolising a seat in a classroom, education, kindness, the hope of a future. The poem has become this book, movingly illustrated by Rebecca Cobb, which should prove a powerful aid for explaining the ongoing refugee crisis to younger readers.

After finishing this book I sat and thought for a while about how I felt about the story. I love the idea of the book and what Ms. Davies has tried to achieve with her words, alongside the illustrations by Rebecca Cobb. However, I can’t say I feel the message will be understood properly by the ages of the children the book is aimed at.

Let me explain. We first meet a little girl who is happy at home with her family, mum, dad and baby brother. She goes off to school and whilst there a war breaks out. She finds what is left of her home, just a blackened hole and so she is all alone. She tells us about her journey in which she ran, walked, rode on a truck and then on a boat that nearly sank. She then ends up in a place full of huts.

She talks about how the war has gotten underneath her skin, behind her eyes – would a little child really think like this? She doesn’t state any feelings towards losing her family or being alone. There is no mention of her being scared. She then peaks in the window of a school and wants to join in the class but she is told by the teacher there is no room for her, there is no chair. Then a little boy brings her a chair and she starts to feel happy.

I so wanted to like this book as I believe that children need books that are not all lovely and beautiful and full of fun, I believe they also need books that tell them what is really happening in the world. This feels though like it hasn’t been written for little children, more an adult writing about a child for other adults to read.

I noticed at the back that Ms. Davies has explained how she originally published it as a poem on the Guardian Newspapers website and how well received it was, even having lots of people taking photos of empty chairs. As I stated above, this story is for adults, hence the reaction her poem got on the site.

To make the book truly understood by children it needs some tweaking. As it stands I believe the book is beautiful, engaging and powerful, it’s just not a story for children and this is who it is market towards.

I don’t remember a time when I wasn’t fascinated by animals. From the moment I could walk I was out in the garden watching ants and worms, and collecting snails as pets.

I had my first pair of binoculars for my eighth birthday. They were so big, I couldn’t hold them steady for more than a few seconds. I can still remember the very first bird I saw through them: a male blackbird with his golden-yellow eye ring and sooty black feathers.

My first job was studying geese in Scotland, my second was hand rearing jackdaws and my third was watching humpbacked whales from an uninhabited island in Newfoundland! In the last two years I’ve returned to studying animals and have been helping out on a long term study of sperm whales, sailing in the Sea of Cortez, and the Caribbean off the island of Dominica.

I’ve seen all sorts of animals, all over the world: chameleon’s in Madagascar, turtles in the Seychelles, walruses in the Arctic, bat eared foxes in Kenya, salt water crocodiles in Australia. But I still love the animals that are within reach of my home in Wales: the ravens and red kites, the grey seals and the choughs, the roe deer and foxes, even the blackbirds that nest in my tiny garden.