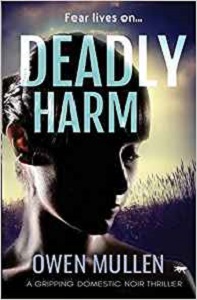 It’s been five years since Mackenzie Darroch was abducted and held captive in a derelict house.

She thought she’d found her way out of the darkness. She was wrong.

When she witnesses a car crash and saves the driver’s life, it sets in motion a chain of events that will alter both their futures.

The two women get involved in a high profile police case and draw the attention of a ruthless reporter. Gina Calvi is convinced Mackenzie is not what she appears and is prepared to do anything to prove it.

Meanwhile, across the city, Kirsty McBride, a young single mother, is persuaded to leave a violent relationship. Her partner, Malkie Boyle a Glasgow hardman, is due to be released from prison. Once back on the street and bent on revenge, Boyle is determined to find the people responsible for stealing his family from him.

Can Mackenzie save them or will Boyle get his revenge?

Mackenzie Darroch runs a Women’s refuge. She starting helping women who have been subjected to domestic abuse after she was held captive and abused herself five years ago. You can find out more about her story in the book, ‘In Harm’s Way’.

The plot of the book features the refuge heavily which is threatened when Mackenzie helps a woman out of a burning car and takes her to the refuge. She is also racked with guilt when a woman turns up at the refuge but they are full and can’t take her in. She is determined not to let this happen again and may just have to cross over the line of right and wrong to keep her promise to the women and herself.

Deadly harm had me hooked from the synopsis and believe me this book did not disappoint. It deals with some difficult issues in a very accessible way. I haven’t read the first book featuring Mackenzie and there was enough information in this book that I never felt like I was missing out or any pieces of the plot were hard to understand.

This is a book I savoured. I could have rushed through it, but I found myself so engrossed that I didn’t want to. The role of right and wrong, decisions, morals kept me intrigued and it does make you think what you would do in the circumstances in the book.