An Empire of Traitors by Serban V.C. Enache – Book Review

An Empire of Traitors by Serban V.C Enache – Book Review 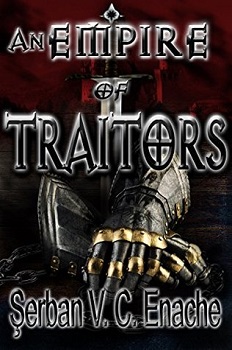 Flesh will bleed. Bones will break. Swords will turn.

An Empire Of Traitors follows several principal storylines simultaneously. It’s been eight years since the end of the civil war between the Inquisition and emperor Zygar Ferus, worshiper of blood gods – and in the five realms of the Empire things are stirring. Driven by ambition or wounded pride, many nobles like the dog-headed serpent of Stoneweed seek to change their fortunes, even with the price of treachery. And from exile, from the heathen nations of the Lowlands, a Sunborn scion of house Mero gathers strength behind his claim.

No family, great or small, shall remain indifferent to fate’s whim. It takes an emperor to rule an empire, but it takes numbers and honored oaths to keep both crown and throne.

In the Westlands, Drakanes, a sister of the Temple finds herself in the role of witness and proctor, of passing judgement on a man accused of murder, who claims to have been possessed. The trial’s proceedings enlighten her as to the truth of it all, and the good sister is willing to, out of pure stubbornness, risk death for justice.

Emperor Hagyai Rovines Mero fears for the continuation of his line, and sends Sycarus on an errand to the Desertlands to bring back an Aharo maiden for his son and heir. Hagyai Rovines desires a betrothal between the prince heir and a savage girl – trying to emulate a long dead custom of the Sunborn emperors. Such a move is most unpopular, and the whispers of another civil war are once again in the air.

Birus Mandon, lord of Rivermark and warden of the Streamlands, is warned of a plot against his sovereign and tries to gather knowledge on the schemes of potential oathbreakers, though his trade is not that of a spy. When he hires the Mounted Arrows Company of Narak al Zull, Birus learns more than mere outlandish tactics; he finds a new source of strength in the sellsword’s foreign warrior god.

Kalafar Sodomis, lord of Weiyenor and warden of the Northlands, has seen his brother get married, and he himself is tried by notions of passion toward a certain lady of a southern house. But as the conflict breaks out, Kalafar needs to act as a proper lord, as a man, not a boy. He summons his vassals for a council at Devil Mound, to decide if the north will go to war or no; and there to also perform a certain ritual to honor the dead of Fengard and Wyrm.

Find out how it all unfolds by reading An Empire Of Traitors, the first book in the series Of Hate And Laughter.

Now this was a title deeply reminiscent of The Game of Thrones, full of political intrigue, sword fights and random slaying of ladies at the dinner table.

The author has created a vibrant universe to set his story, sparing no detail in order to set the scene. My personal preference is something a little snappier, however I can’t help but admire the level of detail that goes into every aspect of this story.

The current Emperor has made an unpopular decision by resurrecting an old custom and choosing a ‘savage’ girl as his son’s bride in order to strengthen his bloodline. So unpopular, in fact, that it is the very excuse the traitors of the Empire need to start setting wheels in motion to dethrone him.

Each chapter is written from the perspective of a different main character, each with their own alliance and story. I really enjoy this style in a book as it keeps things fresh when done properly and allows you to fully come to know the story from multiple angles and I can definitely say that this was done properly – we saw this story from the perspective of loyalists, traitors and those viewing the drama from the outside.

Of all these characters, I think my favourite would have to be Drakanes, a mysterious sister of the temple with bloodthirsty tendencies and a strong feel for justice. She has a dark past that hasn’t yet been revealed to us in full but it’s bound to be awesome.

Another aspect that I enjoyed was that there was the faintest hint of mysticism in the story, the gods have chosen their sides in this battle and their will is slowly being revealed as the story goes on.

I feel that the layout of this book was in order to introduce the reader fully to each player in this series so that we can fully understand their loyalties and family histories, in preparation for a more brutal sequel. All of the characters were fully developed and though they weren’t all likeable, they were all understandable and well thought out.

This book reads like a very in depth historical fiction novel, which was a little heavy for my particular tastes (then again, so is Game of Thrones, heretic that I am). In some instances the use of old fashioned language was a little clunky, overuse of the word ‘mayhaps’ being something that made me wince on a couple of occasions but it was incredibly well put together, the world building is second to none and each and every character is complex and intriguing.

I would recommend An Empire of Traitors for fans of historical fiction with a Roman empire flavour, or fantasy.

Born on March 25, 1989, Bucharest/Romania. Single parent child. I blame my mother for the long name. Licensed in journalism. Creator of the Of Hate And Laughter series.

This universe is one of infernal majesty; it’s my heart and soul. If it matters to anyone, my sun sign is Aries, moon sign is Scorpio, mars sign is Gemini. I don’t believe in astrology, by the way ^_^ My interests are: MMT (modern monetary theory), politics, history, literature, tv-shows, movies, games, music (from epic soundtracks to gothic metal), and I enjoy walking the green and concrete.

I’m a deficit owl and social progressive. I’m also pretty good at drawing. My favorite author is Garth Marenghi (look him up). My favorite comedian is George Carlin. My favorite sitcom is NewsRadio. My favorite actor is Phil Hartman.