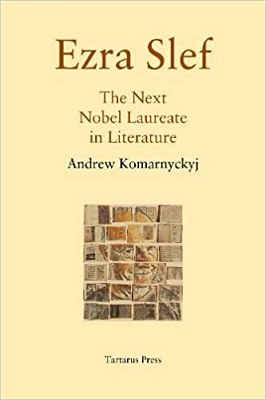 Ezra Slef
The Next Nobel Laureate in Literature

Enter Humbert Botekin, a disgraced former professor of literature, and Slef’s biggest admirer. He writes the definitive biography of Slef, with compendious notes, an introduction, a list of plates, and a glossary.

But Botekin’s narrative soon spirals dangerously out of control. A supreme egotist, Botekin cannot resist assuming the foreground, so that his ostensible biography of Slef gradually changes into a personal memoir in which we learn far more about the biographer than about his subject. The narrative is both sinister and darkly comic.

Botekin’s secrets include making a Faustian pact with a well-travelled gentleman who bears an uncanny resemblance to the Devil–a likeness the self-absorbed Botekin fails to notice, even as his world collapses around him.

This book caught me by surprise. I wasn’t sure what I was getting into when I selected this novel to review, but something called me to it. I’m very thankful it did, as the book is a delight.

The novel is a story-within-a-story. Humbert Botekin, a professor of literature, has written a biography of his hero, (fictional) literary giant Ezra Slef. Yet rather than chronicle Ezra’slife, it’s an autobiography of Botekin.

It’s funny from the first page. Granted, it’s a particular kind of humour – a mishmash between satire and absurdity and irony. I was bemused throughout.

The best thing about this novel is how Komarnyckyj manages to make you enthralled in the journey of an extremely unlikable character. Botekin has an egoism that’s through the roof, as well as being a complete pompous snob and a bit dense, but we’re invited to relish in schadenfreude when he gets his comeuppance.

Another compelling aspect of the story is a minor character who is clearly the devil masquerading as a man, yet we’re unsure what his end-game is, as he seems only to assist people. Tied to his presence is the overarching threat of revenge from a man Botekin wrongs at the start of the novel, so we’re unsure while reading whether the two are connected.

As someone who has an English degree and has read Beckett, Joyce, and most of the other postmodernist writers referenced, I could tell what this novel was “doing”, but I’m not sure how approachable it is for the average reader. The novel does poke fun at itself, but a lot of the humour comes from a rather esoteric realm. Personally, while I have no idea who I would recommend it to, but I very much enjoyed it and consider it rather brilliant.

Andrew Komarnyckyj has been a lawyer, odd-job man, PR Consultant, hospital porter, and plongeur among many other occupations. It’s the classic work history of an author but it wasn’t planned that way. It was a happy accident which has stood him in good stead for writing novels.

His literary tastes range across every fiction genre including – perhaps inevitably – postmodernism, with which he has a love-hate relationship.

When not writing or reading he loves conversation, listening to anecdotes, craft beers, and hiking in mountains. He’s married with two adult daughters.