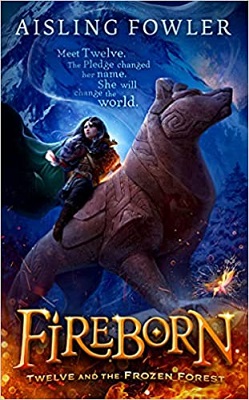 Fireborn
Twelve and the Frozen Forest

Set in the snowy northern forests of an imagined prehistoric world, Fireborn is the middle-grade debut of the decade. At turns exciting, funny and heart wrenchingly sad, it marks the introduction of an unstoppable new voice in children’s storytelling.

Twelve has spoken the Pledge and now she is a Huntling. She has given up her name to train in the art of fighting monsters and keeping the peace, and she won’t get to choose a new one until she has earned it.

But when the Lodge’s walls are breached for the first time, and a little girl is taken, Twelve is the only one interested in going after a child . . .

Teaming up with Dog, the Stone Guardian of the Lodge, Twelve ends up on an epic adventure that will change her life, her name – and her entire world.

Fireborn is a middle-grade book set in a fictional prehistorical world where different clans are protected by the Hunting Lodge a place where hunters live and train.

New recruit Twelve (not her real name) has been at the lodge since her clan, including her family, were murdered. After an argument with another student, Five, the pair are disciplined and taken to the dungeons to spend the night. Whilst there the Hunting Lodge walls are breached for the first time and one of the students is taken.

After hearing a conversation that sounds like no one is going to go looking for the student, Twelve leave the confines of the Lodge and sets out to save her new friend Seven. She is not as alone as she would think though. The Guardian of the Lodge (a large dog-like creature) has been ordered to find the young girl, plus classmates Five and Six unexpectedly join her on her mission.

Can they save Seven and what do the Goblins who took her want with a young girl?

Fireborn wouldn’t be the kind of book I’d select if I was in a bookshop, (I’m not a big fantasy nor a prehistorical fan), however, I was asked to read it as part of a blog tour and I am very happy I agreed.

Twelve is a fierce warrior even if she is often brave on the outside when her inner self is in complete turmoil. She has seen so much in her young life and suffers from nightmares because of it. She is quite the loner and yet Seven is so kind and nice to her. When Seven is taken by Goblins Twelve feels it is her responsibility to save her.

The world-building is truly amazing. It’s so perfectly created that it was easy to visualise. The banter between the characters had me smirking, even if they talk like people from the modern era, it is a fantasy world after all!

The book is action-packed and had me turning the pages at warp speed trying to keep up with the fast-paced scenes. I was sad to reach the end but was happy that I had been taken on a road of mayhem, tension, bravery, and friendship. This is a must-read for middle-graders who love books they can fully absorb and become invested in.

Aisling was born in 1985 and wishes that she had grown up in a magical, mountainous kingdom, but was actually raised in Surrey on a diet of books and Buffy the Vampire Slayer.

After earning a BSc in Biology and working as a support worker and then a nurse, the idea for her debut novel, Fireborn, came to her as she moved back and forth between London and the US. Now based in Hackney, when she is not reading or writing, Aisling loves cooking and plotting adventures (for herself as well as her fictional characters). 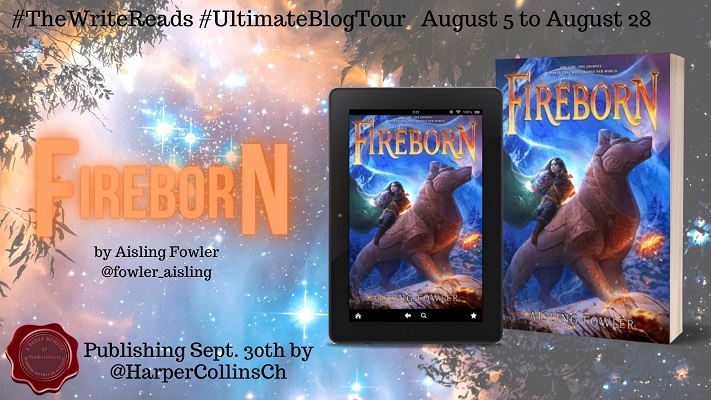