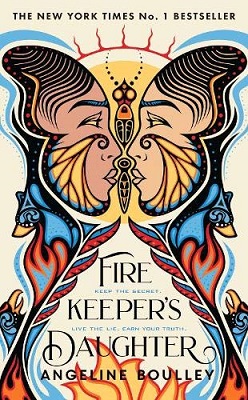 Eighteen-year-old Daunis’s mixed heritage has always made her feel like an outsider, both in her hometown and on the nearby Ojibwe reservation. When she witnesses a shocking murder, she reluctantly agrees to be part of a covert FBI operation into a series of drug-related deaths.

But the deceptions – and deaths – keep piling up and soon the threat strikes too close to home. Now Daunis must decide what it means to be a strong Anishinaabe kwe (Ojibwe woman) and how far she’ll go to protect her community, even if it tears apart the only world she’s ever known.

Daunis Fontaine is a bi-racial, American eighteen-year-old, with a white mother and an Ojibwe father (deceased). She feels because of her mixed heritage that she doesn’t fit in with her white peers, nor the Sugar Island Ojibwe Tribe. She does love her tribal heritage and follows their customs and religion as an unenrolled tribal member.

Illegal drugs and drug-related deaths are rife throughout the indigenous community, so much so that the FBI is looking into it, including sending a young agent undercover who takes a liking to Daunis.

When Daunis witnesses a shooting, the agent, Jamie, manages to get her away from the scene before the police arrive and asks for her help in their investigation which is far wider than she could ever have imagined.

Firekeeper’s Daughter was a real mix bag for me. I loved the setting, the people, I adored reading about the Ojibwe way of life, their customs, beliefs, etc. However, I found it hard to truly like Daunis, as she came across as someone who wanted to be treated fairly and with respect, yet she was quick to judge other people and make assumptions about them without actually knowing them. Some times she came across as mature, other times she seemed so young, and what is with the ‘Secret Squirrel’!!

The plot started slowly and at the beginning of the book I did wonder if this was going to be a DNF for me, so I put it to one side for a while and tried again a few weeks later. Once the thriller/mystery part of the book kicks in, after the shooting, the pace picks up ten-fold and this is where my interest lay.

There are so many sub-plots interwoven within the main, which is why the book is as long as it is. There were all nicely connected and relevant to the story. It was heart-breaking at times to be witness to some of the drug trafficking, sexual assaults, drug-taking, murders that occurred, especially towards the indigenous women. Alongside these horrors, the book also armed you with the knowledge of what the indigenous communities go through, how much of their heritage has been and is still being destroyed.

I notice that the book is soon to be a Netflix series. I can see this working, as whilst you are reading it is easy to visualise what is happening in each scene. I just hope that they do the book justice, not like some adaptations.

Angeline Boulley, an enrolled member of the Sault Ste. Marie Tribe of Chippewa Indians, is a storyteller who writes about her Ojibwe community in Michigan’s Upper Peninsula.

She gained attention from the We Need Diverse Books Mentorship Program. Angeline was the former Director of the Office of Indian Education at the U.S. Department of Education. Her agent is Faye Bender at The Book Group. Firekeeper’s Daughter has been optioned for a Netflix series by the Obamas’ Higher Ground production company.