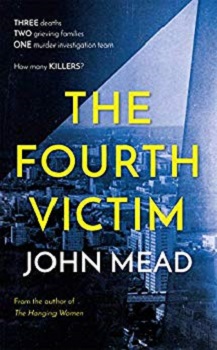 Whitechapel is being gentrified. The many green spaces of the area, which typify London as a capital city, give the illusion of peace, tranquility and clean air but are also places to find drug dealers, sexual encounters and murder.

Detective Sergeant Julie Lukula doesn’t dislike Inspector Matthew Merry but he has hardly set the world of the Murder Investigation Team East alight. And, it looks as if the inspector is already putting the death of the young female jogger, found in the park with her head bashed in, down to a mugging gone wrong. The victim deserves more. However, the inspector isn’t ruling anything out – the evidence will, eventually, lead him to an answer.

The book opens with the murder of a young girl in a park in broad daylight. She is discovered by two passerby’s lay on the grass and with a head trauma. The passerby’s call the police immediately. Time of death is only about fifteen minutes before her body was discovered.

The murder looks like an old case, but are they connected? Then more bodies are found, could they all be related? It’s up to the Murder Investigation Team to find the answers and bring the killer or killers to justice.

The book is set in Whitechapel and area of London well known for the murders of women although over a century ago. It was this that perked my interest and had me wanting to read the book and I had read the authors previous book, The Hanging Women too.

The book did take some time to get into. I can’t say that I particularly had a fondness for any of the characters. They were all doing their jobs and were trying to piece together the clues to bring the killer(s) to justice. I enjoy police procedural books, so this was right up my street.

However, I did find that sometimes there was a lot of detail that wasn’t relevant and I really didn’t need to know some of the information about the characters. I also find it a little weird when sentences are written with a sexual orientation that has no relevance to the plot or the storyline.

Once I’d gotten through the first four or five chapters the book did pick up and I became more involved with the whole, who-done-it. Unfortunately, I had worked out the culprit(s) early on but I feel this is more down to the amount of psychological/ police thrillers I read, I’m used to picking up the clues.

I did enjoy the whole chase and would recommend it to anyone who likes to read thrillers written from the POV of the investigators.

Born in the mid-fifties in East London, on part of the largest council estate ever built. I was the first pupil from my local secondary modern school to attend university.

I have travelled extensively during my life from America to Tibet. I enjoy going to the theatre, reading and going to the pub. It is, perhaps, no surprise that I am an avid ‘people watcher’ and love to find out about people, their lives, culture and history.

Many of the occurrences recounted and the characters found in my novels are based on real incidents and people I have come across. Although I have allowed myself a wide degree of poetic licence in writing about the main characters, their motivations and the killings that are depicted.