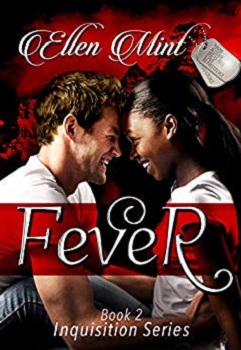 Hot soldier + brilliant doctor = a simmering hate transforming into a raging love in the desert heat.

Doctor Mae Jones had no idea when she agreed to assist the army in vaccinating children half-way around the world what she’d face. She didn’t sign up for a sexy British officer trailing her every move, his giddy smile and sunshine good-looks distracting her. Nor did she expect the sudden rebel attacks and bullets flying while she attempts to try to cure an unexplainable virus about to threaten the whole world. It’s up to her to try and stop a war before it even begins while she keeps falling for this man who’s her total opposite in every way but the heart.

In the second entry of the Inquisition series, this stand-alone novel presents Alistair Young. For those tired of the alpha who want someone sweet as cotton candy, Alistair is your man. Easy on the eyes, and light on the heart — he’s prone to cracking jokes and playing card games with the sick kids. For all his easy-going ways he knows how dangerous growing close to the new genius doctor can be, but he can’t look away either.

It took me a long while to get into this book as it was very slow in parts and I felt like I wanted to skip parts.

The title Fever does suggest passion which for Doctor Mae Jones and Captain Alistair Young there was lots of it, however, sadly some of the plot left me very confused.

A very suitable book if you like military romances but not all the concepts were clearly defined, a section in the middle of the book made my head spin trying to work out exactly where the story was going and who some of the characters were. The language used was clear and easy to read. The defining of the bigger picture was a little muddled.

I very much liked the characters description of Doctor Mae, a strong knowledgeable woman. Captain Alistair was from a tough upbringing was a good soldier and kind-hearted. I also liked the soldier Barry who was a good friend.

Like I said, it was a slow read in places but it all came good in the end. Some of the action was not quite so plausible, but that may just be me and other readers may feel differently and love it.

I would recommend this book if you like action packed stories with spies, rebels and a good old fashioned romance.