Today on the blog we welcome author Angela Petch, with her guest post ‘The Idea Behind Writing Mavis and Dot‘, as part of the blog tour for her new book, ‘Mavis and Dot: Frolics, Foibles and Friendships by the Seaside‘, which was released on 14th November 2018. All profits from sales of the book will go towards research into a cure for cancer. 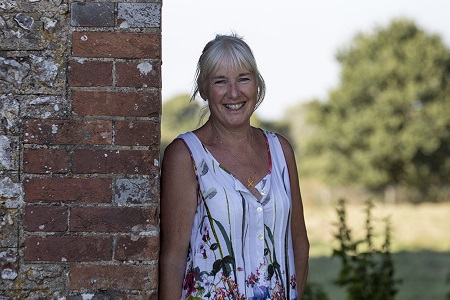 A prize-winning author, Angela Petch lives half the year in West Sussex and the summer months in a remote valley in the Tuscan Apennines. She recently signed a two-book deal with Bookouture for her Tuscan novels and “Mavis and Dot” is a temporary departure from her usual genre. She has travelled all her life: born in Germany, she spent six years as a child living in Rome, worked in Amsterdam after finishing her degree in Italian, moved to Italy for her job, then to Tanzania for three years. Her head is full of stories and she always carries a pen and note-book to capture more ideas.

In May 2017, Angela Petch won PRIMA’S monthly short story competition and recently had a dozen stories published by The People’s Friend magazine.

“Mavis and Dot” was written in memory of a dear friend who lost her battle with ovarian cancer. All profits from sales of the book will go towards research into a cure for cancer.

The Idea Behind Writing Mavis and Dot

I am intrigued by the name of your site: Whispering Stories.

The idea behind writing Mavis and Dot was a whisper at first. Call me whimsical, over-imaginative, whatever, but I often wonder if my friend, Olga, is the one who has been whispering to me to get on with finishing this little book.

She died twelve years ago from ovarian cancer and I still miss her friendship. We met at the school gates, picking up our daughters, who also became best friends. Sometimes we’d take off for a few hours and hunt around charity shops for bargains. We called each other bag ladies and then picked names for each other. I think she was Mavis and I was Dot, but the roles were interchangeable. When she was very ill with ovarian cancer, I wrote our escapades into a story and she reciprocated with a sketch of our two invented personae.

It hangs on the back of my cloakroom door. The colours are a little faded now, but the images still make me smile. It prompted me to find an illustrator for my novella and I am really pleased with the sketches Gill Kaye has come up with.

Twelve years on, Mavis and Dot are the main characters of this little book. I used to love Richmal Crompton’s William stories (still do, actually) and I had that style of anecdotal writing as a guide. The pair, newly retired and living in the (slightly) fictitious town of Worthington-on-Sea, form an unlikely friendship through loneliness. They visit charity shops, Mavis tries out tango lessons, they discover illegal immigrants in a beach hut and meet Lance, aka Cynthia, a singer in a nightclub, but these are only a few of their escapades.

I’ve recently moved to a town on the south coast too. Like all writers, my imagination works overtime. When I travel on the Coastliner bus, I can’t help asking myself where my fellow passengers might have come from, what work they did before. It’s easy to jump to conclusions. Mavis is a thinker too. In Chapter nine, she walks along the sea, after spending a traumatic night at her new friend’s house. Dot has confided in her of her unhappy past and Mavis wants to help her.

“There was a bus dawdling at the stop a few yards from Dot’s bungalow. Sometimes three came along in one go and then one of the drivers would idle the engine and park up to sort out the timings. This bus was empty, but Mavis decided she needed to walk for a change. Instead of taking the shorter route to the shops, she diverted to the sea front. Tamarisk bushes lined the shingle path and, deep in thought, she nodded automatically at dog walkers as she passed by.

Dot’s story had upset her and brought back memories of her own far from happy teenage years. You never really knew what had happened in other people’s pasts, she thought. This retirement town was probably brimming with sad stories, but life had to go on and most people of her generation had learned to keep feelings buttoned up. It was very easy to be judgmental of folk and she was only beginning to get to know Dot. At first Mavis had considered her odd and prickly. But now she could appreciate why her new friend behaved as she did. It was a form of defence, as if to say, don’t get too near me. I don’t think I trust you.”

You’re invited to read the book to discover more. You might cry, you might laugh but I hope it entertains you. Any profits from sales will go towards cancer research. 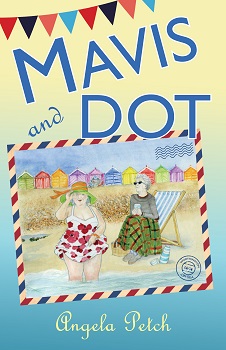 A warm slice of life, funny, feel-good, yet poignant. Introducing two eccentric ladies who form an unlikely friendship. Meet Mavis and Dot – two colourful, retired ladies who live in Worthington-on-Sea, where there are charity shops galore. Apart from bargain hunting, they manage to tangle themselves in escapades involving illegal immigrants, night clubs, nude modelling, errant toupees and more. And then there’s Mal, the lovable dog who nobody else wants.

A gently humorous, often side-splitting, heart-warming snapshot of two memorable characters with past secrets and passions. Escape for a couple of hours into this snapshot of a faded, British seaside town. You’ll laugh and cry but probably laugh more. “This book is quirky and individual, and has great pathos…[it] will resonate with a lot of readers.” Gill Kaye – Editor of Ingenu(e).

Written with a light touch in memory of a dear friend who passed away from ovarian cancer, Angela Petch’s seaside tale is a departure from her successful Tuscan novels.

All profits from the sale of the books will go towards research into the cure for cancer.

You can find out more about Angela Petch by visiting the website/social media sites below.